Since the reign of Queen Victoria, Balmoral Castle in Aberdeenshire has been a Royal residence and, from 1952, a private retreat during the summer months for Queen Elizabeth II and her family.  A place of beauty and relaxation, the castle is frequently home to members of the Royal family during the late-summer months where they venture for a moment away and to enjoy hikes and other activities in the grounds of the estate. The location is also renowned as a place where the Royal family host prestigious guests such as Prime Ministers and potential husbands and wives for the children and grandchildren of the Queen. In September 1958, The Boys’ Brigade added their name to the impressive list of guests in a moment to mark 75 years of progress for the organisation. This was a special occasion which saw one-tenth of the total strength of Officers in the United Kingdom on parade for Her Royal Highness and was also the moment when Boys received the Queen’s Badge from the hand of Her Majesty for the very first time.

The 75th anniversary of The Boys’ Brigade was not quite on the scale of the events of 1933 or 1954 but there were, nevertheless, several important happenings worldwide. These events had a wide appeal, with a focus on camping drawn upon to celebrate three-quarters of a century of work at the Ardmore camp in New Zealand in April, at the Caribbean camp in Jamaica, and the ‘750’ camp at Lilleshall in August three of the more notable events. The international flavour continued at the annual meeting of The Boys’ Brigade Council, with overseas visitors from Singapore, Ghana, The Cook Islands, and Denmark, part of the 1,200 strong group of Officers who joined together in Aberdeen for one of the largest annual meetings the ‘BB’ had ever seen. The main item on the agenda was a “controversial motion” which considered the age ranges in the organisation. However, focus quickly turned to what was a landmark moment in Brigade history, when a convoy of 50 buses left South Market Street for the journey from Brigade Council to Balmoral Castle for the reception with Her Majesty the Queen. The extensive caravan of coaches set off on the c.40 mile drive to the castle, arriving one-hour and 50 minutes later, thus providing sufficient time for the 2,000 strong contingent of Officers, Boys, and guests to prepare for their moment with the Queen. 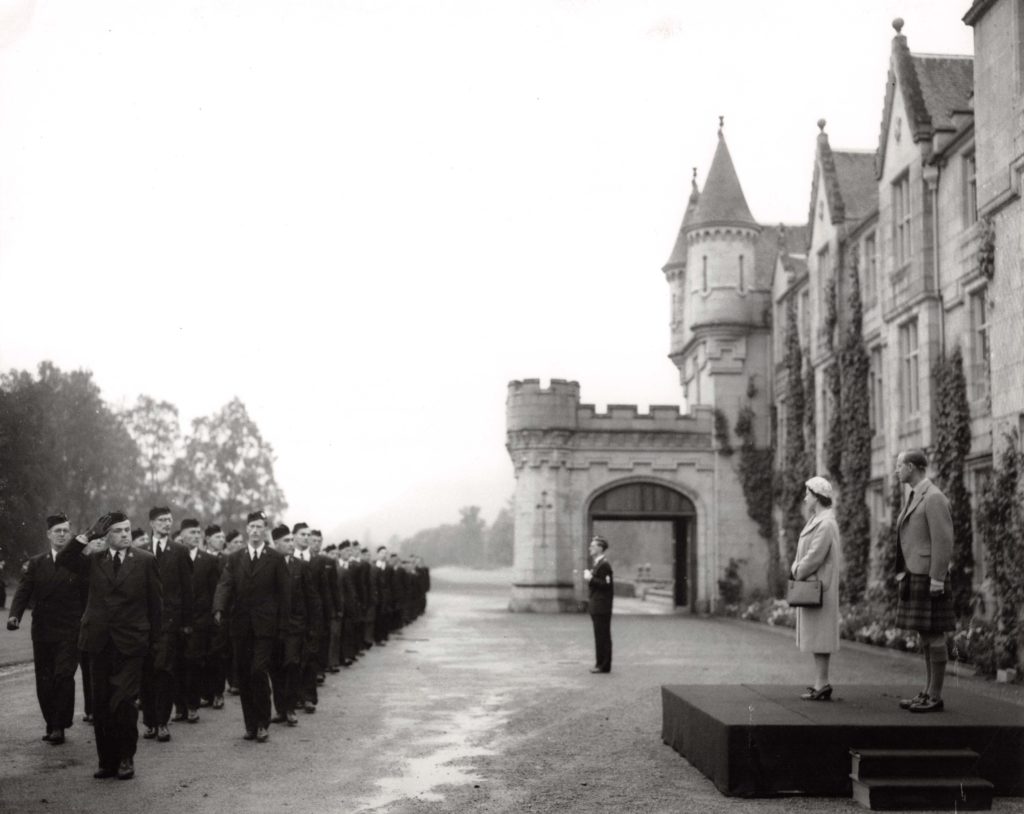 Under the command of Brigadier Sir Alick Buchanan-Smith, and accompanied by music from bands of the Aberdeen Battalion, eight Companies of Officers marched onto the lawns of the castle and formed three sides of a hollow square. Eagerly waiting in the light showers, the parade was ready for their Royal inspection, and at 5pm the doors to the castle opened with Her Majesty the Queen and the Duke of Edinburgh receiving the Royal salute under low clouds and a splattering of rain. Once the inspection had concluded it was time for the presentation of awards. In total 47 badges were presented by their Majesties, with the Queen decorating 26 Boys from the Aberdeen Battalion with Queen’s Badges, and the Duke of Edinburgh handing 21 Gold Duke of Edinburgh Awards to Boys from across the country. Fixed to a velvet cushion that was held by a Staff-Sergeant, each badge was handed by the Officer in Command of each group on parade to the Royal presenter who gave a personal touch of a word of congratulations to the proud recipients. Despite having fewer awards to issue, Prince Philip took much longer to present the awards bearing his name and Her Majesty “waited some time for her husband to finish”. However, this afforded an opportunity for the Queen to delight some of the families and guests who cherished a moment to speak with Her Majesty whilst the Duke handed out the last of the badges. With the inspection and presentation of awards over, the parade then marched past and left the garden in a moment that presented a fine stepping-off point for the final quarter of the Brigade’s first century.