In December 1977, the full-time staff at Brigade Headquarters in London had formed a National Action Group. This small representative group of five then lobbied the Brigade Executive to initiate a nationwide development campaign to increase recruitment. By 1979 this had resulted in the biggest campaign for new membership ever undertaken by The Boys’ Brigade, launched under the slogan, ‘The Boys’ Brigade, First For Boys’. The Development Campaign Committee reported directly to the Brigade Executive on progress, under the general oversight of the Brigade Secretary, and was coordinated by John Edbrooke, Secretary for Development, formerly B.B. Organizer in the Caribbean.

As part of the campaign, intended to extend up to the Centenary, districts, battalions and companies were urged to participate in promoting the movement and given free materials to do so. Besides publicity, important matters such as programme content, awards, uniforms and the quality of leadership were given serious attention in the context of Brigade development. In its second year, the recruitment campaign spent £26,000 on publicity materials, such costs being wholly met from sources outside the Brigade, by sponsorship, services freely donated, and financial contributions. Also in 1979, the Brigade Executive set up a Programme Study Group, chaired by John Edwards, ‘to study the programme and environment which members experience in The Boys’ Brigade’. The intention of this Group was to provide a thorough conceptual reappraisal of the whole Brigade programme, seeking to identify factors and trends likely to influence the ability of the Brigade to fulfil its Object, and asking whether the existing programme would still meet the needs both of boys and of the Churches in the 1980s. 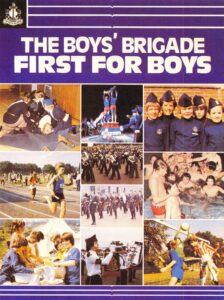