The tents were up, the Quartermaster was ready, the Programme Officer had finalised his preparation, all the advance preparation was completed, the time had come. Ail that remained was for the 850 boys, girls and leaders to arrive. They came from St Eustatius, St Maartens, Zimbabwe, South Africa, Denmark, Ireland, Wales, England and Scotland to Rozelle Park, Ayr to enjoy what was to be an oustanding International Camp.

On arrival, all Campers were directed to their various Companies which had been called after Islands on the West Coast of Scotland. Islands which became home for ten days were Arran, Bute, Cumbrae, Eriskay, Gigha, Islay, Jura, Mull, Rhum, Skye, Tiree and Uist. Each island had a staff who had done a vast amount of preparation to ensure that everyone who attended was comfortable and that they would also enjoy themselves. Within each Company, was held a variety of inter-tent and individual competitions and events including of course the traditional ‘Kit Inspection’. Every Company had its own Captain, Cook, Quartermaster, Programme Officer, Banker, Security Officer and Chaplain. The Camp was served by 13 Chaplains who worked as a team to great effect and indeed the spiritual aspect of Camp was one of the highlights which will live for a long time with all those who attended.

Over and above the many activities within Companies, the main thrust of the Camp Programme was centred round a wide range of activities and visits to centres in the surrounding areas to the Camp like Irvine, Kilmarnock, Girvan, Ailsa Craig and of course the wonderful facilities put at the Camp’s disposal in Ayr by the Kyle and Carrick District Council. In the course of the ten days a very successful Open Day and Sports Meeting was held on Camp and at the Dam Park, Ayr; a Civic Reception was given by Provost Gibson T. Macdonald and the Kyle and Carrick District Council in the Ayr Town Hall; a Church Parade to St Leonard’s Church in Ayr; a Drumhead Service open to the public on the Camp Site; a Camp Concert; a fabulous disco to which the young girls of the district were invited; a Songs of Praise; and a very moving Closing Service. The highlight of the Camp was undoubtedly the one-day trip to Tighnabruaich to the site of the first camp held by 1 st Glasgow Company in 1886. The Camp personnel crowded on to the romantic and famous River Clyde Paddle Steamer The Waverley early on a very damp and dull Thursday morning. As The Waverley left Ayr the organisers of the Camp wondered if they were wise in going through with such a pilgrimage. The sail would take  ½ hours and the rain was beginning to fall heavily, there was no shelter on the boat and one could only speculate on the state the Campers would be in when they arrived at their destination. However, the longer the day went the better the weather got and indeed when The Waverley sailed through ‘The Narrows’ and all present caught their first glimpse of Tighnabruaich, the village seemed like a jewel as it glittered with pride under the strong rays of the sun which Campers experienced throughout the rest of the day. The music provided by 2nd Wishaw Company Flute Band, 47th Aberdeen Pipe Band and 44th Dundee Company Bugle Band enhanced the excellence of the weather and the magnificent Parade of blue-topped Campers which converged on the Commemorative Cairn and seats in front of the Royal Hotel and the Auchenlochan Hall. The plaque was suitably unveiled by Viscount Thurso after which the Campers marched to Kames Shinty Pitch where they were entertained by Mr Alistair McDonald a former Glasgow BB boy and a famous Scots Folk Singer. The Parade then dismissed and made their way through Auchenlochan and Tighnabruaich buying gifts in the shops and talking to the locals who turned out in force to witness this splendid occasion. The Parade reformed in the Car Park at Suzy’s tearooms and marched back to The Waverley led by the Flute Band who played The Girl I left Behind a nostalgic repeat of what happened in 1886.

On going on to the Tighnabruaich Pier, the local ladies presented the leading Company of Campers with a flower and a kiss, again capturing a similar incident which happened 100 years ago. As The Waverley left Tighnabruaich to the strains of the Pipe Band music all present reflected with pride and often a tear on what had been a very wonderful BB occasion. 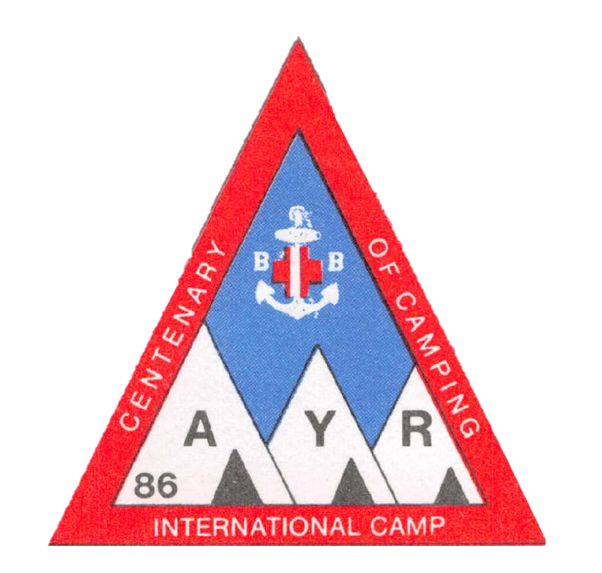