Within twenty years of the official ending of WW1 in 1919, Britain was back at war with Germany and the other Axis powers. As in WW1, the Boys of the Brigade were required to take up arms to defend the country, and again there was to be an important role for them to play on the ‘Home Front’.

Whilst WW1 had been described as the first ‘mechanised’ war, the whole country was dreading what advanced weapons would bring to those who now remained in what had previously been seen as the relative safety of ‘good old Blighty’. In anticipation of mass gas and fire-bomb attacks from the air, hundreds of thousands of children, including many younger BB boys, were evacuated to the countryside from London and other large metropolitan areas. Sometimes whole new BB companies were set up with just evacuees as members.

Older BB boys who remained in the cities, frequently helped to run BB companies whilst Officers were away in the forces, as well as taking part in many other duties such as Fire-Watching, being hospital bicycle messengers, manning ambulance Posts, doing Air Raid Precaution Work, and assisting the Auxiliary Fire Service. These voluntary duties were sometimes performed under highly dangerous conditions during the blitz of cities such as London, and Birmingham, occasionally resulting in severe personal injury, and tragically, in some cases, death. As in WW1, boys were also ‘Digging for Victory’, by planting vegetables. The BB Diary of 1941 asked boys to take as their motto ‘Endure Hardness’ and they did. There were numerous BB Crosses for Heroism and Diplomas for Gallant Conduct awarded for brave actions by BB Boys. A BB ‘National Service’ Badge was introduced, to recognise the time spent by BB boys as part of the war effort. Amazingly, the BB was so highly regarded that H.M. King George and H.M. Queen Elizabeth went ahead with a 60th Anniversary Royal Review at Windsor Castle in 1943.

Many BB Captains kept in regular communication with their ‘old boys’ whilst they were doing their military service in foreign lands and many tales were reported of exemplary conduct, such as that of Glasgow BB ex-member, Piper Bill Millin, who famously played the pipes during the ‘D’ day attack on the beaches of Normandy in June 1944. Sadly, letters were often returned because the serviceman was either ‘missing in action’ or confirmed as dead. As in WW1, a number of former BB Boys were awarded the Victoria Cross and one the George Cross for their gallantry. The ‘BB spirit’ was sometimes all that remained for some servicemen who had been captured by the enemy, many miles from home; a good example being those held in the notorious Japanese P.O.W. Camps, who operated ‘Stedfast’ Clubs to remind themselves of much happier times at home.

Towards the end of the conflict, BB Camps, which had been prohibited earlier in the war, were allowed to resume provided that they were away from the coast and well camouflaged. Even after 1945 when hostilities ceased, it would be a few years before ‘normal life’ resumed. 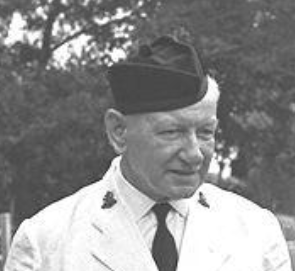 The BB in the War