“WEMBLEY 1954″—a proud memory in the hearts of thousands who saw or took part in the biggest B.B. assembly that England has ever known. And by “Wembley 1954” we mean the great “Festival of Boyhood” which the London District organised for the B.B. on June 19th in the famous Empire Stadium, Wembley.

The opening parade of 1,000 senior Boys of the London District made an impressive setting for the Presentation and Consecration of new London Colours which were the gift of Mr. W. N. Cave Allan, Captain of the 1st London Company and the only one of the Founder’s Lieutenants in the 1st Glasgow still serving as an active Company Officer. Then followed a Display of Stick Work by the South Midland District and a Tent Pitching Competition by 22 teams of the London District. From Wales came 370 Boys all dressed in costume; Druids robes, old Welsh national dress, miners begrimed with coal dust, engineers, shipyard workers, sailors and a hefty red-shirted rugby fifteen. In a setting of a Bardic circle they sang as only Welshmen can sing—truly a picturesque and most enjoyable performance. A P.T. team of 504 Boys swung into position and such was their precision in the various exercises, it seemed that they had been doing it together for years. An outstanding performance by twenty Battalions and Groups from the London District. Then Scotland came into the picture with the Hawick Pipe Band and Dancers. Their marching and playing was superb while the agility and skill of the dancers provoked much enthusiasm from the crowd. A “Gymnastic Kaleidoscope” by sixteen Companies of the Enfield Battalion included football, rugger, netball, tumbling, boxing and apparatus work. All taking place at the same time, people just couldn’t see everything that was going on. Not because they weren’t in the right place; because one person just doesn’t have enough eyes to look at all of Wembley all at once! Then there were vaulting teams, an international Relay Race (won by England), the Massed Bands and Parade of Old Boys… From the audience they went outside the Stadium to line up for a march-past the Brigade President and Stanley and Douglas Smith, the two sons of the Founder. To the tune of “The Old Brigade”, these men came onto a great roar of welcome; old men, middle-aged men, young men. Soldiers and sailors, artisans, business men, clergymen and ministers, men of substance and men of a humble way of life. They all came, some 2,000 of them, proud to march in the greatest B.B. parade of its kind London has ever seen.

Thus “Festival of Boyhood” came to an end. With the singing of the ‘Vesper Hymn, the Benediction and the National Anthem, the curtain came down on a great display. 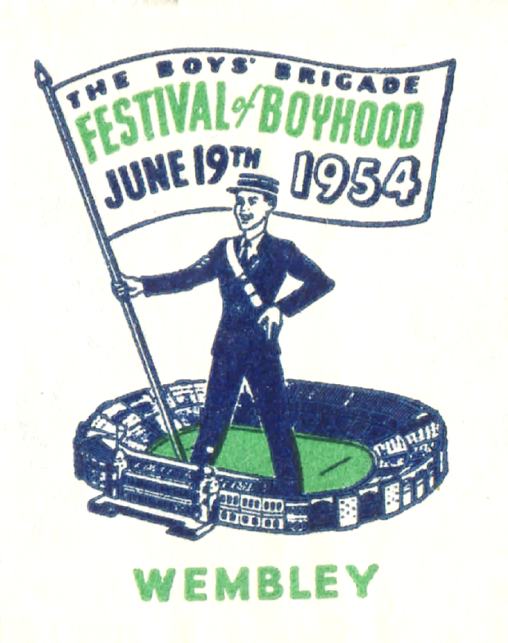