For many years, certain types of sport, athletics and physical activity generally, had been included in badge awards: others, such as football, had been omitted. The Company Section Activities sub-committee minutes from 22nd July 1967 record: “a system of “colours” was approved. The Supplies Department were be asked to produce suitable cloth colours for a specified list of sports and games, with an additional blank one, on which the name of the sport or game ‘could be inscribed locally. It was also agreed that not more than one colour for each sport or game should be awarded in each session, and that the Sportsman’s Badge and subsequent stages would be awarded when three separate colours in the same or different activities had been gained.”

Various editions of the Stedfast Mag in 1968 covered the introduction of the new awards scheme, and the issue of July 1968 detailed the regulations covering the new sports colours: These “colours” consist of cloth badges, all highly coloured and imaginatively designed. The holder of a “colour” will wear it on his football shirt, gym vest, etc., and only Boys who have qualified will be allowed to wear ‘this particular badge. Different design “colours” will be available for fifteen different sports, and then there is a “general” design for any sports not covered in the individual list – which is: Archery Badminton Cricket Cross Country Cycling Fencing Football Golf Gymnastics Judo Orienteering Rugby Skiing Table Tennis Lawn Tennis. Colours may be awarded to those who qualify under the following headings:

(a) Participate regularly in the activity within Company, Battalion or District [or at least three months.
(b) Attend training and instructional periods and show progress in their own personal performance.
(c) When appropriate (such as, with football) represent the Company, Battalion or District in a reasonable number of matches, with satisfactory conduct.
(d) Show knowledge of the sport in its wider aspects, e.g., history, rules, competitions, etc.

A Boy may gain as many Colours as he is able in one session, providing they are all for different sports. In different sessions, he can gain further Colours for the same sport.

Following their introduction for the 1968-69 session, the executive minutes noted that by November 1968: “Supplies of all the new badges were available with the exception of…the Sportsman’s Colours for Table Tennis and Archery, which should be available during December 1968.” However, there was any early design change, and following on from the first issue of Football colours in green, the Stedfast Mag reported that “as the colour of the new BB football colours clashed with that of Celtic, these colours are available in Maroon.” From 1969, the football colour was produced in maroon until the end of their issue in 1994.

Apart from a few changes in the colour of the overlocking and the shape of the Ski-ing colour, the designs of the original colours remained the same, and the styling carried over to additional colours. The original 16 sports colours included: Archery, Badminton, Cricket, Cross- Country, Cycling, Fencing, Football, Golf, Gymnastics, Judo, Lawn Tennis, Orienteering, Rugby, Ski-ing, Sportsman and Table Tennis. However, by 1970, the was agreed “that Swimming should be added as a colour available under the Sportsman’s Colours regulations.” By the issue of the 1985 BB Supplies catalogue, the number of colours had increased from 17 to 23, with the addition of colours for Fishing, Golf, Judo, Roller Skating and Volleyball, together with Silver and Gold flashes to be worn underneath the Colours, to indicate that a second and third award of the Colour had been made.

Following the changes to the Awards program in 1982, demand for colours started to decline, and by 1994 it was recommended to the Brigade Executive “that the Sports Colours be withdrawn as a minority of Companies demand them”, and they whilst there was 3 reported written instances of opposition, it was decided to adhere to the recommendation, as it was not economically viable to continue to stock the colours in BB Supplies, and they were dropped from the Awards program by the 1994-95 Session. 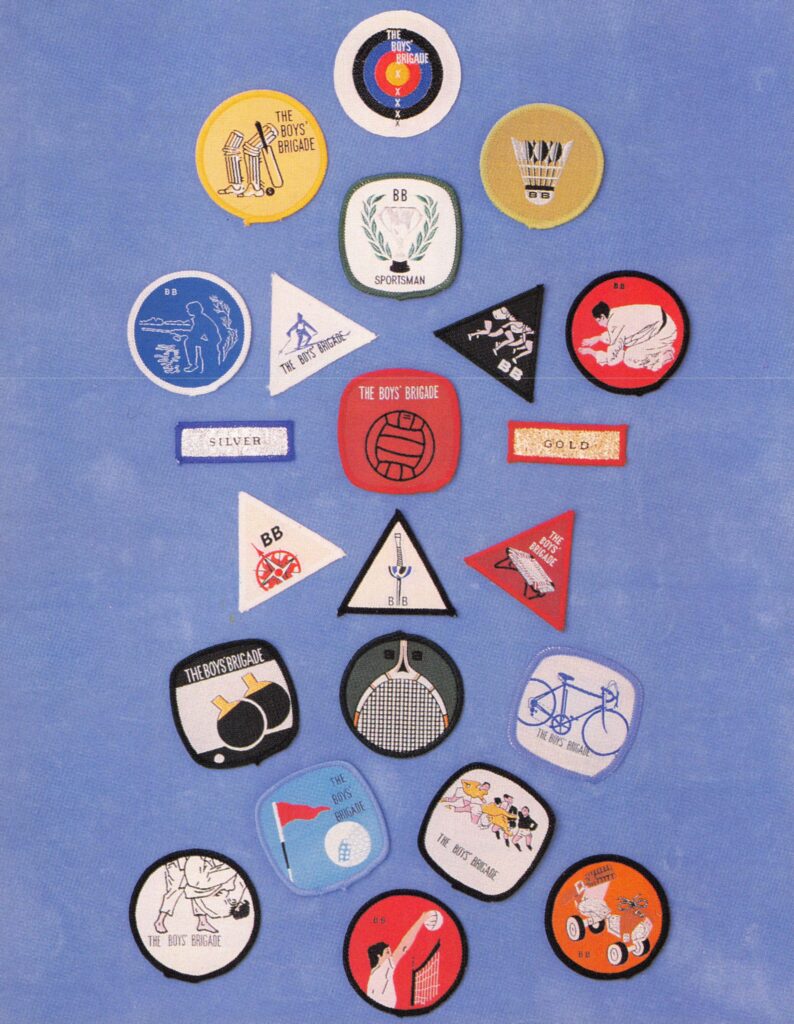