The celebration of the Diamond Jubilee, compared to that of the Jubilee only ten years earlier was a rather understated affair. even though Britain, and large parts of the world were focused on World War II, the occasion was marked by a civic gathering in Glasgow, as well as events in many of the larger centres around the country. Thanksgiving Services were broadcast on the radio, at home and overseas, bringing together past and present members and friends in one great fellowship of gratitude to God for all that had been accomplished for the welfare of Boys since the Brigade was born.

The highlight of the celebration was a Royal Review held under strict secrecy due to the ongoing war, but was captured on film, and later featured in the Pathe newsreels of the time. A contingent of three hundred Boys with Band paraded for inspection in the Quadrangle of Windsor Castle, to mark, as The Times said, the completion of the sixtieth year of ” this mainspring of disciplined youth training.”

His Majesty was accompanied by the Queen and Princess Elizabeth, and together the royal party made a careful inspection of the ranks, both the King and Queen speaking to many of the Boys in a way that showed their real interest in the Brigade and its work. Before the end of the parade the King addressed the Boys:

I am very glad, as your Patron, to welcome you to Windsor on this occasion, the Diamond Jubilee of The Boys’ Brigade. The word Jubilee reminds me of the good work that the Brigade did at the Silver Jubilee of my father who was also your Patron for nearly forty years. I well remember receiving at the Albert Hall at that time the message which relays of your runners had carried through the length and breadth of this country, from John o’ Groats and Land’s End.

When The Boys’ Brigade was founded sixty years ago your Founder, Sir William A. Smith, builded better than he knew, for he started not only a great movement, but one from which all our present wide-spread youth training was destined to spring. For sixty years the Brigade has faithfully served our Country and Empire, and advanced the interests of our Boys. That it is still young and as vigorous as ever is proved by the fact that the past twelve months have seen the greatest increase ever achieved in one year. Many thousands of your old comrades are serving in the Forces at sea, on land and in the air. We are proud of their brave record, and thankful for their spirit of service and sacrifice. I feel sure that the B.B. will go from strength to strength because it is built upon the twin pillars of religion and discipline, and so is meeting two of the greatest needs of the present time.

Good luck to you and all your comrades. May all you Boys live to see the centenary of this great movement. 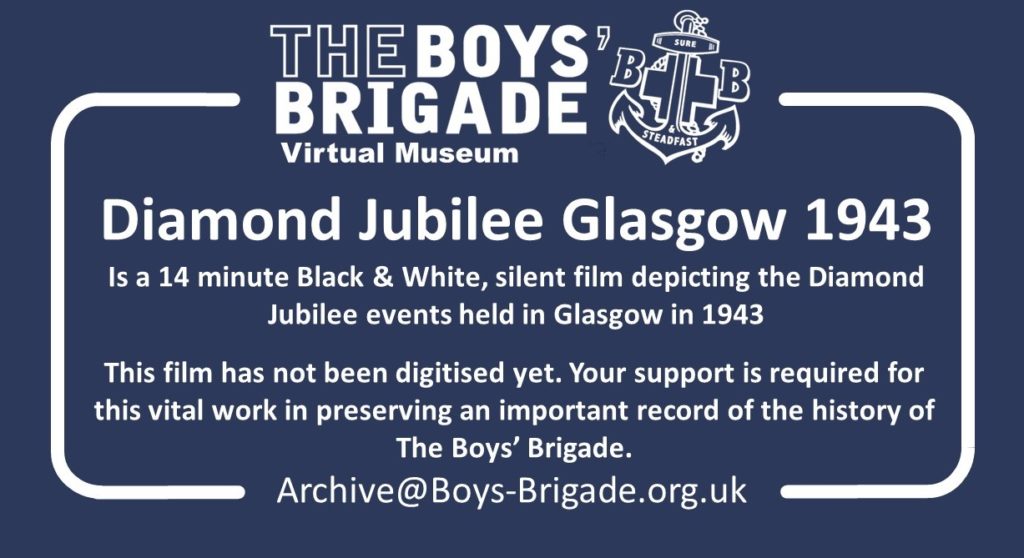