In 1950 the prospects for Britain’s future looked much brighter than in the immediate postwar years of austerity. ‘Reconstruction’ was virtually over and peace could at last be savoured by the long-suffering British public. To celebrate this spirit, the outgoing Labour Government planned a Festival of Britain to be held on London’s South Bank on the centenary of the Great Exhibition of 1851. To mark the occasion, The Boys’ Brigade organized a ‘Festival of Britain Run‘, on the same lines as the 1935 Royal Jubilee Run, in which relays of boy-runners on five routes from the extremities of the United Kingdom were to carry a message to reach King George VI on 10 May 1951 at Buckingham Palace.

The Festival Run reached its climax in brilliant sunshine, after days and nights of rain and storm along all five routes into London, when the final bearers with their escorts doubled in to Buckingham Palace to hand their batons to the King. Their entry was proceeded by the arrival of the Brigade Guard of Honour, headed by a silver band and a combined drum, fife and bugle band, which aroused the admiration of the crowds in the Mall as they marched with drums and fifes playing from Wellington Barracks in through the gates of the Palace. ‘The months of preparation, organization and rehearsal, the devoted service of countless Officers and the gallantry of the Boys, many of whom had run through darkness, rain and snow along lonely roads and across bleak moors,’ eulogized the Gazette in an eight-page account of the Run, ‘the well-planned organization and the willing cooperation of so many friends and well-wishers had surmounted all difficulties. The Run was over.’ 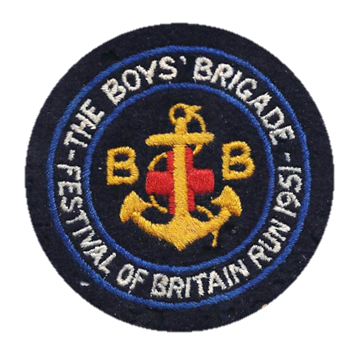