The Seventy-fifth Anniversary celebrations of The Boys’ Brigade were held in 1958. Though not on such a large scale as the events of 1933, or 1954, the Anniversary included several important happenings worldwide, and is a convenient point at which to close this chapter. Most significant in Britain was the 750 Training Camp for over 670 senior boys, mostly British, held in August 1958 at Lilleshall Hall Recreation Centre, near Newport, Shropshire. The Commanding Officer was Sir John Hunt, Secretary of the Duke of Edinburgh’s Award Scheme, and the Rev. David Sheppard, who had played for England in twenty-two test matches and was to become in time Bishop of Liverpool, acted as Chaplain of the camp. Wilson-Haffenden, who ·was also present, remembered the camp for its ‘spiritual activity’, in particular the success of his discussions with boys of their ‘spiritual problems’ after ‘lights out’ one evening. The presence of Sir John Hunt and a full coaching staff also ensured ample time was devoted to canoeing, expedition work and various sports.

‘The real value of celebrating an anniversary, particularly of a great movement such as The Boys’ Brigade, lies not so much in rejoicing over the past achievements – great though they may be – as in setting a sound course for the future ,’ wrote Sir John Hunt, giving his timely afterthoughts on the 750 Camp in the Gazette:

In every movement which continues to thrive during 75 years in a period of tremendous change- social, economic, political- there is an essential core which must not, on any account, be tampered with. We all know that the essence of The Boys’ Brigade is the Christian Faith. To me the presence of this Faith throughout our Camp, and among all ranks, will remain an inspiring and unforgettable fact … but in other respects a movement must adapt its ways to the changing times, if it is to capture the imagination and hold the allegiance of the young people in each generation. I believe boys and girls of today are seeking and needing – some of them desperately so – outlets to a spirit of enterprise and adventure which is in them still, both despite of and because of the encroaching walls of material progress. The opportunity to provide for this urge is one which the B.B. and other spheres of youth should not miss, even though it may mean changes in existing training programmes, even training policy. 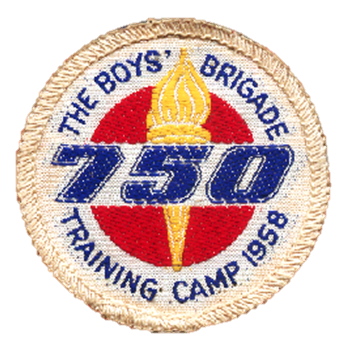