Not for long on the first Saturday did the white city of some one hundred tents with the four massive mess marquees remain the home of many separate individuals. In no time at all the whole camp was knit into a body where the esprit-de-corps was expressed by at least one Boy camper as being ” terrific This did not alter the fact that to the Boy the camp in its early days was the means to feed and house him for the primary purpose of his sports activities. After all, did he not come to Lilleshall for that purpose?

And so, to his Soccer, Rugger, Cricket, Tennis, Badminton, Basketball, Table Tennis, Athletics, Judo, Weight-lifting, Olympic Gymnastics, Fencing, Archery and Golf he went. For some, it was as a main subject, for some, as a second subject. But whether main or second subject, the Central Council of Physical Recreation had provided coaching at top level. Names on the list of Coaches and Union Jacks on their track suits bore evidence to this. Yet although we were very youthful and very unskilled, our mentors were very patient with us, and we have reason to believe that they enjoyed their side of the business as much as we did ours. We think, too, that by the end of the week we had at least responded in some measure to their tireless energy on our behalf. We finished on the last Saturday with a Festival of Sport, when mums and dads joined with mayoresses and mayors in greeting Sir Stanley Rous, who was our chief guest, and in watching us at our work….

But back to Camp—and this was indeed a Camp with a capital ” C”, which had other ends in view than being just a dormitory. How fortunate we were in having with us as our Commandant, Sir Alfred Owen, the Brigade Secretary and the Bishop of Portsmouth. The attention paid to them in the camp concert was in itself evidence of the esteem in which they were held! Our Chaplains, too, were great and none could have served us better, be it in Devotional or Recreational activities… What a wonderful time we had, and God was very good to us. He was on the football field with us and on the archery lawn. He presided over us at the Festival of Sport, and He was thus all the more clearly with us in our quieter times. We give Him our thanks for making it all possible. Our one regret was that only 430 Boys took part in this great Camp. This was an experience which no Boy would want to miss and yet many were never even told about it. 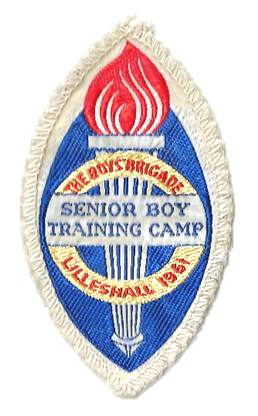