As with most events the planning and preparations far outlasts the actual events in time, and this was certainly true for Glenalmond 1963. At least two years of careful planning went in to make it a memorable occasion, one that was over all too soon. Looking back it is almost impossible to recollect all that happened, all the people we met, all the things we did or tried to do. One memory is certain to remain with everyone who was there, the ease with which Boys of all nations mixed so freely and the way in which lasting friendships were made. BB fellowship was at its very best; nobody was in the least concerned with colour or nationality, unless, of course, you happened to be presenting an item at a concert when the pride of one’s home country was apparent and necessary. Fortunately the organisers had planned for a Camp that would provide everything for the modern Boy. There may be the critics of the Juke Boxes, the “canned music” and other contemporary gimmicks, but there is no doubt the Boys enjoyed them. The more subtle delights, such as the surrounding country, the magnificence of the college grounds, the college buildings, and the meticulous layout of the Camp itself, also made their mark; they could not have done otherwise.

Trinity College gave us perhaps the finest site we could have wished for, and the warmest thanks of the Brigade are due to the college authorities for their kindness. How unfortunate it was that the weather could not have been as co-operative. The flags of all nations represented fluttered gaily over the six Camp companies laid out in neat lines, and not one bell tent to be seen. Each ridge tent housed six Boys and it was impossible to tell where the Boys came from; they were all mixed up thoroughly. New Zealand, Sweden, Nigeria, Southern-Rhodesia, Bahamas, Finland, Ireland, Nyasaland, Canada, Denmark, America and so many other countries were represented. We delighted in one another’s’ company, we talked, we sang, we played, we toured, we prayed together, what opportunities, what a power for good. Those who have attended the great FDF Camps at Marselisborg could see a similarity in Glenalmond. So much went on, it was possible for many things to take place at once. Boys were here, there and everywhere. Daily trips took them to see the glories of Loch Lomond or a visit to St. Andrews. Hill walking and orienteering competitions, games of all kinds in “mickle” and “muckle” sports, eating in one of the three canteens, playing with that huge “murder ball”, trying to understand the trampoline —even the Brigade Secretary was tempted to try this. Those who were unlucky enough to get across the Scottish weather spent time in the Camp Hospital, where they received the care of experts in bodily welfare. The Rifle Range, the river, the shops or just walking about taking photographs had their attraction. It would be interesting to know just how many photos were taken or even more interesting, the total value of all the cameras!

“Scotland the Brave” was heard on more than one occasion, in fact the pipe band must have used it as a signature tune! How some of the London Boys wished they could have had a Bugle Band “to show ’em what a proper BB band sounds like!” Music and song played its part, whether traditional or ” pop”. The Steel Band of the members from Trinidad was so excellently presented that a second performance was arranged. This was typical of the Boys from overseas who came prepared with national items which delighted us all. There were, of course, special events, the first of these was the TV recording for “Songs of Praise” which was shown after the Camp was over. The setting was ideal and the calm and patient control by the BBC men was quite amazing. What is more amazing is that 1,500 voices could not make enough volume to begin with! 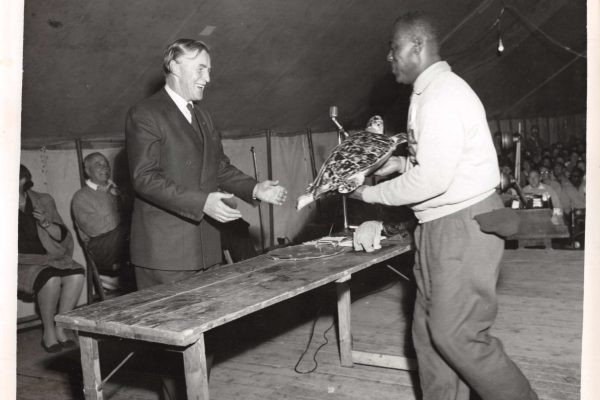 Then who could forget the “Highland Games”, the special event for visitors day. Sir John Hunt, the Camp C.O. opened the Games in the traditional manner by beating his Claymore three times on the shield. Immediately we were entertained to a non-stop fast moving programme of track and field events including tossing the caber, cross-country racing and even our old friend “Murder Ball” had its place. Scottish dancing and bands provided further entertainment for the 2,000 visitors’ it is estimated came through to Glenalmond for the day. Sunday started with the Communion Services in the Camp, but our periods of worship together were crowned by the wonderful Camp Service on the Sunday morning. The whole Camp formed up in a hollow square and three of the Camp Chaplains shared in leading the worship. The Senior Chaplain, Rev. Dr. Small, spoke simply and directly to us all. No one could not be unmoved by this great service, the beauty of the place, the warmth of 1,500 good friends and the undoubted presence of God in our midst. Sunday evening we again had the opportunity of “going on the air” in the radio programme “Sunday Half-hour”. From all reports this was received very favourably; the great marquee was used for the broadcast which was a “live” programme. Our soloist was John Moorman of the 13th South Essex Company who had also performed on the T.V. recording earlier in the week. The Band of the Black Watch gave us a performance on Sunday morning—”Scotland the Brave”? definitely!

Monday was Edinburgh Day 40 buses full of Boys and a police escort through Edinburgh. How the bus drivers seemed to enjoy this privilege. After an early start there was time for a good look round the city and particularly the castle, then on to the buses again for the short trip to the Corn Market for the Civic Reception, when an excellent tea was provided for us. We were warmly welcomed by the Lord Provost and the City fathers. Back to the City again and the Castle Esplanade for the magnificence of the Edinburgh Tattoo. What a great spectacle this was, and how it was enjoyed by everybody. And so on to the last days of Camp. The end suddenly, was upon us. The climax surely was the memorable closing ceremony and service. So simply done, yet so effective. After a rousing concert the entire camp gathered outside the main marquee to give thanks to God for his goodness to us during eight happy days. Gathered round a great beacon, burning fiercely, we watched representatives of 32 countries plunge their burning torch into the flames, and it was all over—or was it? Can a great event like Glenalmond 1963 ever be finished? Surely the spirit of it lives on in the lives of the Boys; memories will be re-kindled, and we shall continue to give thanks to God for the fellowship, the friendships made and renewed.

So much could he written, but words are sometimes inadequate. We can only rejoice at the fact that so many were prepared to work so hard to make the Camp possible. Sir John Hunt led us to the heights and for his leadership we are sincerely grateful. The Life Boy Leaders and others who so cheerfully and willingly worked in so many different ways, perhaps in shop, canteen. First Aid and rest tent, have our profound thanks and regard. Faults there may have been these are best forgotten, we are always learning. The lesson that must have been learned by all who attended is that there is no barrier or boundary that cannot he swept away. We must give God thanks that the B.B. is the means whereby this can be achieved. Truly “in Christ there is no East or West”, and long may Glenalmond ’63 live in our hearts. 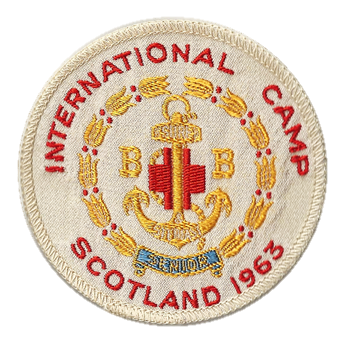 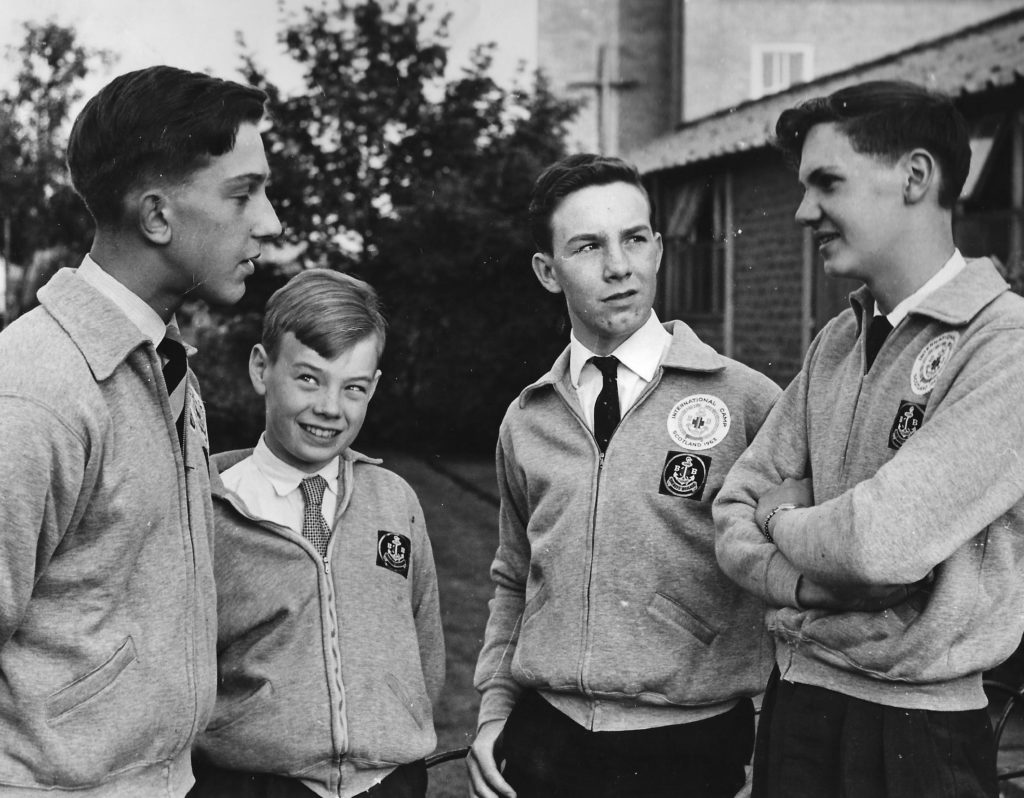 This taxidermied turtle was presented to the Boys’ Brigade in 1963 at the International Camp by members of the contingent from the Caribbean Islands. (Lord Maclay can be seen receiving this in the gallery above.)