Take 400 young men and women aged between 15 and 25, place them in a busy University town in the middle of the holiday season, provide a full and balanced selection of activities, mix well with a liberal dose of freedom, leave for a week, and wait for results Campus ’83, held at Durham University and Durham Cathedral between 13th and 20th August, was a recipe we had never attempted before on such a scale. No-one quite knew what would come out of the cooking pot! There was a certain amount of sales resistance to advance publicity simply because the event did not fit neatly into any well-used pigeon hole. It was new, exciting, the first of its kind, it was also daring, it was intended from the beginning to treat the young people as the young adults they are with their own valid views about the BB at the start of its second century. More than two years of preparation went into this recipe — its success will be measured by the response of its individual ‘ingredients’ in the coming months and years!

Campus was all things to all men. Its activity programme covered the main headings of creative art, environmental studies, music/drama and sport with Instruction provided by experts in their own particular fields. A varied spiritual content was provided by a resident Christian music group and regular use of the 12th century Cathedral. Important social issues of the day. such as world development and the nuclear arms race, came under searching discussion in a series of workshops. Events included simply for fun included video films, a raft race on (and in) a local river and finding out what 400 people could do with a huge parachute in a session devoted to ‘new games’. It was non-stop action with the inevitable late nights and early mornings. No article can hope to do justice to the experience: each of us Is left with our own personal inspiration harvested from a week of great fellowship together. The resident band Heartbeat, with their enthusiasm and joy in worship, had an important contribution to make throughout the entire week. So did Cornerstone, a talented Christian theatre group, who twice performed before an appreciative audience. The Bishop of Jarrow involved himself wholeheartedly: not only did he preach at the opening service but he also visited each of the three college groups to share in the day-today life of its participants.

Much has been left out of this article —space allows only a brief mention of the torchlight vigil outside the Cathedral, the civic reception for representatives of more than 21 participating countries, concerts by Giant Killer, Hall of Mirrors and Stage Two, the environmental workshop by TV botanist Dr. David Bellamy, the message of ‘Auntie Flo’, the serious issues of television, unemployment, overseas development, nuclear power and the work of British Youth Council, the Great Boat Race and the All-Star Campus Show. Campus, as I have said, was the first of its kind. I hope it will not be the last. 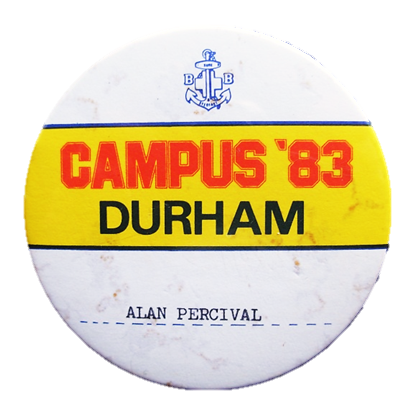 This mug was produced to commemorate the Centenary event in Durham.