Glasgow was the appropriate setting for the main BB Celebrations and these were concentrated on the Annual Council weekend in August. On the Friday evening, civic receptions were held in three city galleries and halls for several thousand visiting officers, who were welcomed and addressed by the Lord Provost. This was preceded by the Trooping of the Colour in the City, and followed by the Beating the Retreat by pipes and drums and bugles.

A formal meeting of Brigade Council was held in Kelvin Hall on the Saturday morning, chaired by the President, the Earl of Elgin and Kincardine, supported by the North West District President, His Honour Judge R. Lockett. Very many gifts and messages from brother and sister organizations in all parts of the world were received.

In the afternoon a great massed display took place at the Ibrox Football Stadium; massed bands and thousands of boys contributing to a magnificent spectacle, around which a procession of floats drove, featuring aspects of BB history, some with congratulatory tableaux from Scouts, Guides and other organisations. In the evening the Glasgow Battalion presented another great display in the Kelvin Hall Arena. There was a BB market with stalls offering BB souvenirs of all kinds; other stalls selling publications and equipment, and the 1st Glasgow exhibition and Centenary Company Magazine.

Towards midnight, a torchlight procession of bands and floats, of officers and boys, joined by many of the public made its way through the city to Kelvin Park for a firework display.

On Sunday morning, devotions and Holy Communion were held quietly in the thirty or so Halls of Residence or 131 local churches, but in the afternoon the hundreds of coaches and buses again converged on lbrox Park. Here there was a parade of Battalion Colours with their Colour Parties from all over Britain and Ireland; an international pageant, massed hymn singing accompanied by a300 strong silver band, and a short service of thanksgiving. The stands were filled in blocks by Glasgow Battalion, by battalions from other areas of Scotland, England, Wales and Ireland, and a large BB grey-shirted contingent of senior boys from the Centenary international camp at Scone.

Pride of place was given to the 1st Glasgow Company which marched on to ringing cheers to take the central position. Another contingent of Old Boys who had been at the 1933 Golden Jubilee Camp also marched in to form up on either side of the main rostrum.

An exciting moment came when radio links were made with boys in New Zealand, with a BB party at Thurso, (birthplace of Sir William A. Smith) and a party at the Woodside Mission where the 1st Glasgow started on the 4th October I883. 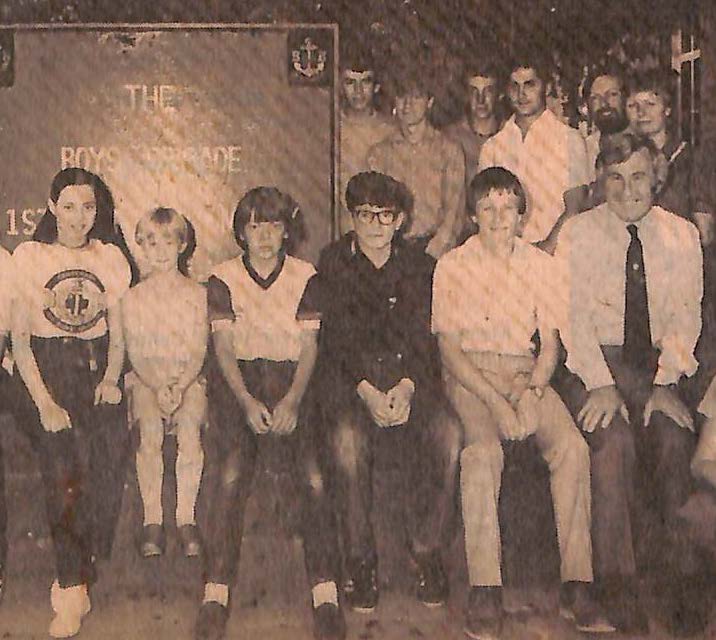