The Brigade announced a new challenge and appeal for the Millennium in the BB Gazette September 1998. The challenge was for each Company to raise at least £200 which would create a total of £260000 to then allow the purchase of four new Atlantic 75 Lifeboats for the Royal National Lifeboat Institution. The appeal name used was ‘Lifeboats for 2000’ and it was hoped that this new class of Lifeboat with an impressive speed of 32 knots would have replaced half of the RNLI fleet by the year 2000. The lifespan of the Atlantic 75 was expected to be at least 16 years largely replacing the Atlantic 21.

The original idea was to station four lifeboats at Ramsgate (England), Atlantic College (Wales), Lamlash (Scotland) and Youghal (Republic of Ireland). The lifeboats were to be suitably named after The Boys, Brigade and Battalions and Companies would play an important role in the naming ceremonies and dedication services of each of the boats.

A ‘Lifeboats for 2000’ fundraising pack was sent to Company Captains in the January 1999 Gazette full of information about the RNLI and fundraising ideas. Companies quickly rose to the challenge and regular reports appeared in the forthcoming months of the Gazette with updated totals towards the target and some of the more unusual fundraising ideas. These included Battalion Church Parades, Brass Band Concerts, sponsored swims, sale of Christmas puddings, jam jar collections and sale of second-hand uniforms.

The Brigade has responded to many appeals over the years and this was again to be no exception. The grand total reached was £159,688.95 which allowed for the purchase of two Atlantic 75 Lifeboats. Well over 500 Companies made significant contributions and although short of the original target it was going to be a proud day when the lifeboats would be added to the RNLI fleet.

The first lifeboat (B770) was placed in service on 24th January 2001 and named ‘The Boys’ Brigade’. This lifeboat was stationed at Lamlash (Isle of Arran) and was attended by Lady Thurso and many Companies from across Scotland. Notably this lifeboat was part of the muster for duty on the River Clyde for the Commonwealth Games Flotilla that took place on the afternoon 26th July 2014.

The second lifeboat (B789) was named on 18th May 2003 and carried the name ‘Sure and Steadfast’. This lifeboat was stationed at Harwich, Essex and was handed over by Steve Dickinson (Brigade Vice President) and John Young (Chair of Brigade Executive and Brigade Vice President). Also in attendance was Terry Waite (President of Harwich Lifeboat Station). A Boys’ Brigade Band proudly played on Harwich Pier as part of the special day.

Both lifeboats have given good service to the RNLI with the B770 having over 150 shouts whilst stationed there. As new lifeboats are developed sadly there is a limited lifespan and B770 is no longer in service. However, B789 remains in service in the ‘Relief Fleet’ to be called on when and where required and is also presently used for training.

The contributions of many for this appeal enabled the RNLI to serve those in need whose aim is ‘Saving Lives at Sea’. A proud and successful achievement for service to the community. 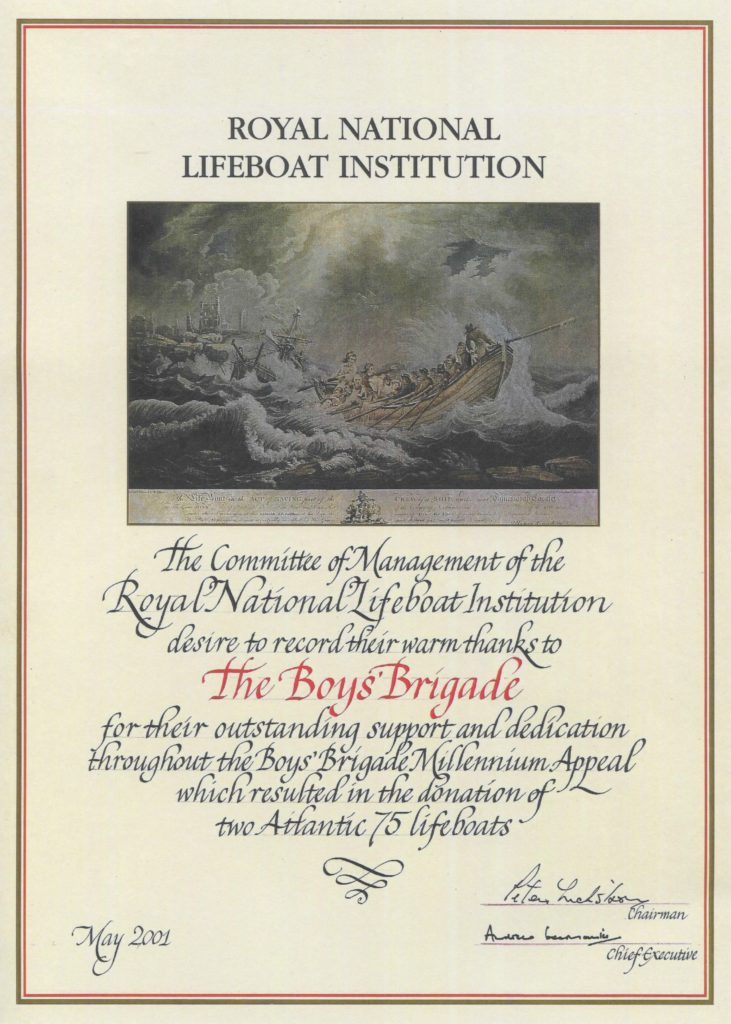