Held at Morphett Vale on the southern outskirts of Adelaide, the 9th PAC provided a large choice of electives to take advantage of the campsite and Adelaide’s attractions. Tours included Discover Adelaide, The Hills, Victor Harbour and an all companies visit to Speedway Park.

After the huge (for BB) Canberra Camp, the 9th PAC provided a wonderful contrast, containing a wonderful camp “spirit” and sense of co-operation as many Officers were now working their second PAC under the elective system, one that required a considerable effort from them, compared to the old program method used up to the 7th PAC. The concept of the Seniors Night Out was introduced at the 9th PAC, where Senior Boys would have a night out in the City in company with a couple of Officers.

Adelaide was also affected by unseasonably cold weather, requiring campers to wear warm gear in January. The “gully” winds were a nightly occurrence, culminating in a fierce wind in the early hours of Sunday January 11 1987 that snapped the concrete-steel poles that supported the huge marquee used for church services and concerts. Even in the raging wind, the Lord guided those with electrical knowledge through the maze of live wires that were entangled in the collapsed canvass. Although campers were covered in the wind-blown dirt, the Communion Service held a few hours later amongst the ruins was truly a blessed occasion. 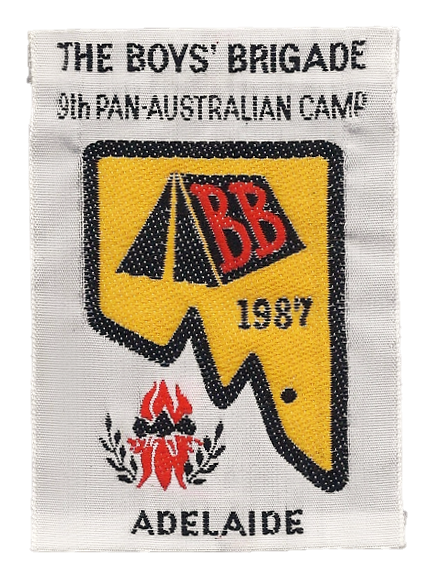