To provide an imaginative contribution to the Captain Cook Bicentenary celebrations, in a way in that all members of the Brigade could personally participate, in 1970, The Boys’ Brigade Australia organised a relay run across Australia, to Kurnell, Botany Bay, to coincide with Her Majesty the Queen’s attendance at the Cook landing re-enactments.

Three routes, involving hundreds of Boys running in twenty-four, to forty kilometre ‘legs’, were devised. Alpha route (1450km) commenced in Perth, Western Australia, and went by air to Adelaide, and thence overland via Mildura, Hay, Cowra and Bathurst to Botany Bay. Bravo route (837km) commenced in Brisbane, and travelled via Warwick, Stanthorpe, Armidale, Tamworth and Newcastle. Mike route (806km) came by air from Tasmania to Melbourne, and then via the Hume Highway, Albury, Canberra and Goulburn to Kurnell.

From Friday, 24th April 1970, until Wednesday, 29th April 1970, more than seven hundred Boys from over one hundred and ten Australian Companies ran day and night carrying messages of greeting to Her Majesty, The Queen. The Boys taking part came from every State and the messages originated in every State Capital, and were endorsed in the National Capital and in many towns and cities along the route, finally being handed to the Hon. A.E.Willis, Chief Secretary of New South Wales who received them on behalf of Her Majesty at Kurnell on Wednesday 29th April. 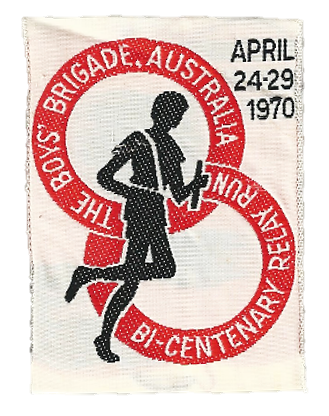