In 1906 the annual London District Display at the Royal Albert Hall was destined to be changed forever. The proprietors of the Daily Telegraph kindly presented a handsome shield for a new competition, which tested Boys’ Brigade Companies in drill and general efficiency. While drill played an important part in the competition, marks were also given for the other branches of the Boys’ Brigade work, including Bible Class, gymnastics, clubroom and band. The first round of the competition was held at the headquarters of the London Rifle Brigade, R.V., on the 9th April 1906, when six London Battalions were represented by the following Companies: 9th London, 54th London, 66th London, 86th London, 3rd Enfield and 1st South Essex Companies. Captain R H Moody acted as judge and selected the 54th, 66th London and 3rd Enfield Companies for further examination and competition. The 66th London with 118 marks and the 3rd Enfield with 116.5 marks proved successful in the second round, which consisted of examinations in branches of Brigade work other than drill.

On Saturday 10th May 1906 the 66th London and 3rd Enfield Companies competed for the final of the first ever Daily Telegraph Shield competition at the Royal Albert Hall. Strictly speaking this was a London District BB competition; but held in a national arena and supported by a national paper; the competition took on a status which could not be matched outside London. The 3rd were hopeful to continue the success of the previous year when they had won the Meares Colours, which at the turn of the century was the London District Drill title.

At the start of the display, the parade for the Guard of Honour, composed of the two finalists, were summoned by the brazen strains of the bugle, which cut through the Albert Hall air. As they halted defiantly facing each other, each vying to stand the smartest, the onlookers speculated at their respective merits, there was understandably much tension in the air. Not, however, for long; the trim figure of a guardsman appeared in the arena. A word of command, a couple of clicks, and the judge for the competition, Captain H St L Stucley, 3rd Battalion Grenadier Guards, Commandant of the Chelsea School of Instructors, was minutely scrutinising the Companies, and marking them for the condition of their uniforms. Then he returned to the platform, and the display was allowed to continue.

During the evening the handsome shield, whose design is emblematic of the work undertaken in the BB was on view on the platform. Although there were several important guests present for the display, including Sir William A Smith and Major-General Baden-Powell, it was the giant circular shield that was the centre of attention.

The final of the Daily Telegraph competition was eagerly anticipated by everyone. It was the first time such a competition had been held at the Albert Hall, and the experiment certainly was justified. At the appointed time the 66th London, hailing from Kentish Town, marched into the arena amidst great applause by the onlookers. This Company, whose members were younger than their opponents from the 3rd, started the final with an advantage of 1.5 marks gained in the preliminary round. The movements set by the judge were well selected and exhaustive; and though mistakes were made, the 66th passed through the ordeal with credit. However, on that evening the 3rd Enfield performed a sharper and cleaner display of drill.

The result was 66th London: 228 points, 3rd Enfield: 234.5 points. Captain Thomas Room Plowman from the 3rd Enfield received the magnificent shield. More than a month after the memorable win at the Royal Albert Hall at a celebration evening meeting in mid-June, the “Daily Telegraph Medals” were presented to each of the boys in the 3rd Enfield. The Company was presented with a replica Daily Telegraph plate some 225mm in diameter made of wood with a picture of the Daily Telegraph Shield in the middle.

The Daily Telegraph Medals were bronze medals with a blue ribbon and silver or bronze clasp. The medals were presented each year to the boys of the winning company from 1906 up to 1932.

Over the years many famous people have presented the Daily Telegraph Shield in including Major-General Baden-Powell in 1907, just months before his famous Brownsea Island experimental camp and the formation of the Scouting movement. The shield has been presented by other famous guests of Honour, including our present Queen Elizabeth II in 1951 and the Duke of Edinburgh in 1953. 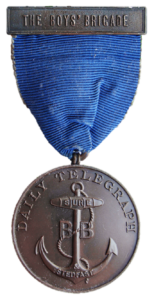