In the late Victorian era Glasgow was a busy and bustling city. Often referred to as ‘the Second City of the Empire’, Glasgow epitomised an age of progress, innovation, and industrial expansion. For teenage Boys and their families – particularly in working-class areas – times could be hard, with thousands of Boys living in the tenement streets experiencing long days, with education bookended between earning a wage in the morning and evening.

It was within this context that the first of all uniformed youth organisations (which have since spread around the world) was formed. The leader of this enterprise for young Boys residing in the North West of the city was William Alexander Smith, an Officer in the local Volunteers and a Sunday School teacher who became increasingly concerned by his failure to teach Boys in his class due to an absence of discipline.

So it was, on Thursday, 4 October, 1883, that Smith accompanied by two brothers, James and John Hill, threw open the doors of the Free College Church Mission on North Woodside Road with their own take on Victorian innovation which would shape youth and social work in Britain and overseas to the present day.

The Boys’ Brigade was launched in the Free College Church Mission, 329 North Woodside Road, Glasgow, when the doors were opened by ‘the Dauntless Three’ of Smith and the Hill brothers. All three men were of deep religious conviction and lived lives of Christian service and received support by the Minister at the church, the Reverend George Reith. The lads at the Sunday School had been informed of a new Brigade for Boys, and there was no lack of recruits on that first evening. Some of the Boys joined for the fun of a new experience, others had come out of curiosity and to witness something novel.

In total, fifty-nine names were taken in the first three weeks with the first recruits all aged between twelve and sixteen. Strict discipline underpinned this new enterprise, and no Boy was allowed to fall-in if a single minute late for the Thursday evening sessions, which consisted entirely of drill, with the parade opened and closed with a short service.  The insistence of strict routine meant that many of the new recruits ceased attending soon after joining. However, for those who remained, the strictness – which was always tempered with a degree of kindliness – enhanced the importance of the Brigade. 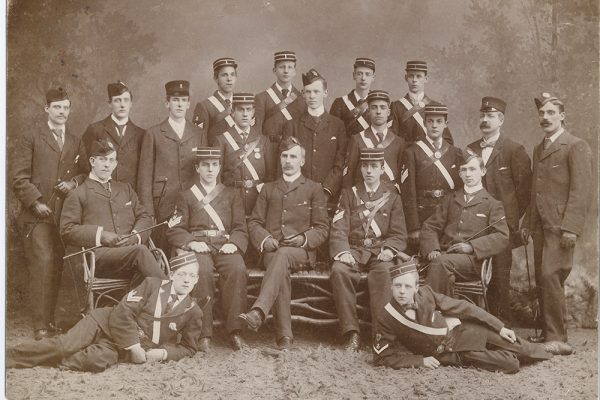 The formal enrolment of The Boys’ Brigade came in November 1883 with thirty-five Boys filling the application forms and accepting the conditions of membership. The programme for the first session was completely focussed on drill parades and not until drill had begun to be understood, and its object in producing order and obedience reached, that other activities were instigated. The implementation of changes was incremental and measured, with Bible Class the first supplementary activity introduced in December 1884. Similarly, there was no uniform during the first session, with only the Glasgow ‘bowler’ warn by Officers, and the sole adornment for Boys being a rosette as a badge of membership.  The Boys of the Sunday School warmed to the new movement, and thought well of the innovation on the ordinary routine, and were quite willing to submit themselves once a week to a “stiff bit of drill”.

In December 1883 an examination for promotion was held which changed the structure of the Brigade and recognised the dedication and progress of the Boys. Open to all members aged over fourteen, the examination for promotion started with a practical inspection of drill, with the twelve best performing Boys progressing to a written test. From this the highest six Boys in the written examination were promoted according to order of merit, with Sergeants Wm. H Wylie and George Mill; Corporal John R. Jarvie and John Tennet; and Lance Corporals Robt. Paterson and Alex Davie the first Non-Commissioned Officers (NCOs) in The Boys’ Brigade.

Following these promotions, the Brigade was divided into six squads, each under the charge of one of the NCOs, with this small band of Boys growing into an established body who understood their motto: Sure and Stedfast. The first inspection of this newly formed Brigade was held in the Mission Hall on 25 March, 1884, with Captain H. A. Ker, 1st Lanarkshire Rifle Volunteers, the Inspecting Officer. There were no arms, uniform, or band at this stage, but they made a good impression on their Inspecting Officer. The following week, the first annual soirée was held, and was attended by all members who were present at the inspection. This brought to a conclusion the first session of The Boys’ Brigade and with no summer camp to fill the time before the second session would commence, there was a sense of expectation as to what the next year of The Boys’ Brigade would bring.

There was no sign that the Founder had any further plans in mind other than establishing the one local unit for the Boys of North Woodside, but others began to take notice, and the ground had been prepared and set for the advance about to take place. The Boys’ Brigade was barely months old but some had already seen that this would become a true Brigade rather than a single unit. A significant improvement had been observed at the Sunday School at the Free College Mission Hall and the voices of opposition began to melt away. Moreover, other Sunday Schools began to notice the possibilities and the expansion of the Brigade would commence at speed from the second session onwards.

The first Boys’ Brigade Company – later the 1st Glasgow – were pioneers and have been looked upon for generations as an example to others. The influence of the 1st Glasgow has been seen throughout the history of The Boys’ Brigade, with ten of the original members present for the Jubilee celebrations in 1933, whilst two survived for the Founder’s Centenary in 1954. From humble origins, The Boys’ Brigade has grown into a worldwide organisation that has influenced kindred movements including the Scouts, Jewish Lads’ Brigade, and Girls’ Brigade, with the pioneering efforts of ‘the Dauntless Three’ vital to the progress that followed.