The idea for The Boys’ Brigade Memorial Garden came after attending the opening of The Church Lads’ and Church Girls’ Brigade Garden, at the National Memorial Arboretum in Alrewas near Lichfield in June 2002. After several more visits and enquiries, a proposal was put forward to the Birmingham Battalion to build a garden there. It was decided that this project would be better undertaken by the West Midlands District and so a presentation was given to the district in May 2006, where it was agreed that the District would set up a steering group to oversee the design, planning, and construction of the garden on behalf of The Boys’ Brigade at no financial cost to the Brigade.

The steering group consisted of representatives of Battalions within the West Midlands District, comprising Paul and Debbie Arkinstall, John Mendus (Birmingham), Chirs Buxton (Mid-Staffs and Sandwell), Kevin Ford (North Staffs), Rob Bolton (Wolverhampton and Shropshire), John and Sue Hoddinott (West Midlands), and Loz Gazeley (Worcestershire). Now the planning started, ideas of how the garden would look and what it would contain was proposed and drawn. A 6 page leaflet was designed and produced with details and an artists impression of what the memorial garden would look like. This was to be ready for Brigade Council in Cardiff.

The day after the 2006 National Band Competition, a site visit was organised to see the area the National Arboretum had offered us, and introduce our then Brigade President, the very Rev Professor Alan Main to the project. A stand and display was set up at Brigade Council and there was great interest in the garden project to such a degree that by the end of Council we had the £3000 required to purchase the plot and a 10 ton boulder of Ailsa Craig rock and many promises of cash and help. We now had the confirmation that it was right to go ahead with the garden. The work was started on changing Debbie Arkinstall’s artist impression of the garden into a proper site plan, which Frank Mayo volunteered to do for approval by the Arboretum, which was approved with minor changes.

The garden was designed to incorporate items from different parts of the United Kingdom and Republic of Ireland. The entrance to the garden is between two pillars of bog oak, 5000 years old semi-fossilised wood from the peat bogs of Ireland. RELIGION and DISCIPLINE have been carved into the pillars. They were jointly presented by the BB in the Republic of Ireland and the BB in Northern Ireland. A boulder of Ailsa Craig granite was donated by Scotland with the chorus of the well known hymn ‘Will your Anchor Hold’ inscribed on a polished face of the rock. Fastened to the rock is a Royal Navy Killick pattern anchor to represent the BB emblem. The centre of the stone paving circle is a slate monolith presented by the BB in Wales. On the smooth top of the monolith is a commemorative plaque surrounded by the BB object inscribed into the surface. From England a large slab of Portland limestone carved with the traditional spelling of SURE & STEDFAST, and on the stone a bench is placed. Next to the Portland slab is a piece of stone from the grounds of Pennyland House, Thurso, the birth place of our Founder Sir William A Smith. 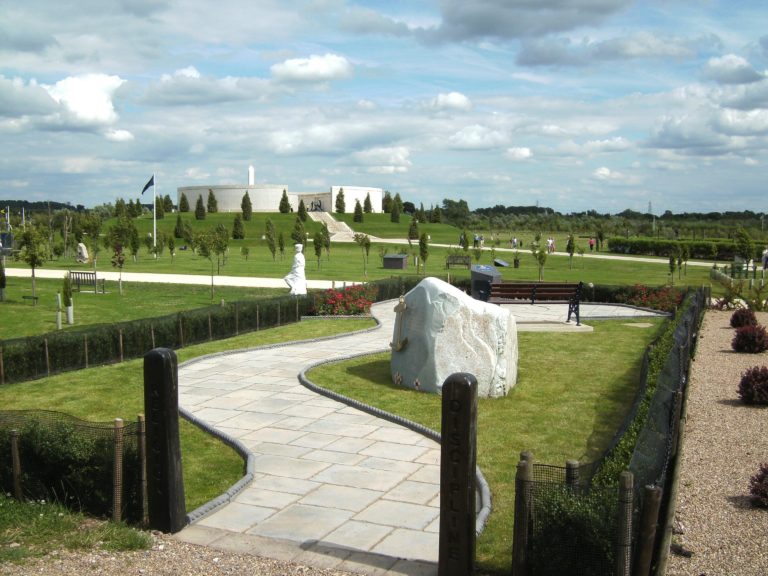 Two triangular rose beds flank the patio area, filled with The Boys’ Brigade rose, named to celebrate the centenary of The Boys’ Brigade in 1983. A box hedge surrounds the garden and drifts of 125 each of Tete-a-tete Daffodils, Pheasant Eye Narcissi, Standard Daffodils and Blue Grape Hyacinths. So with plans complete a new leaflet was prepared and printed. A PowerPoint presentation was presented at Brigade Council Bradford in 2007 and was well received. The display stand was popular and plenty of support was shown for the project.

September 2007 saw various pieces of the garden start to turn up at the Arboretum and the company employed to do the ground work made a start. After the paving had been laid, Officers, Boys and friends from the West Midlands District helped to distribute and smooth the topsoil, dig trenches and plant the box hedge, lay turf, plant bulbs, and tidy up. The garden was ready for the service of dedication and opening on Saturday 21st June 2008.

An addition to the BB Memorial Garden was made in 2016, when a row of blue bricks with the names and Companies of the 16 Victoria Cross and one George Cross recipient engraved on them, which were installed along the edge of the grass by the box hedge facing the Ailsa Craig rock. A stone plaque explaining the bricks was placed in front of them. A short service of dedication was led by the Brigade President Lord Griffiths of Bury Port on Saturday 21st May 2016.