After receiving a Cambridge degree in law Oliver followed his father’s footsteps and became a solicitor in the family firm. Committed to serve the community, he became concerned for the plight of young working-class boys who he saw trapped in a cycle of crime, poverty and wretchedness.

Ten years an officer in the 1st Nottinghamshire Volunteer Rifle Corps had taught him the value of discipline in developing an esprit-de-corps amongst a body of men and in 1901 he accepted an invitation to become an officer in the 18th Nottingham Company of The Boys’ Brigade at Hucknall. Four years later he took command of the 2nd Nottingham Company in Rutland Street; a company of seventeen boys who met once a week.

His ambition was to combine the pillars of religion and discipline that underpinned the Boys’ Brigade with opportunities that would help disadvantaged boys prosper in life and to this ends he introduced nightly meetings where the boys could engage in creative activities.

When the membership of his Company outgrew space available at Rutland Street he looked for alternative accommodation and purchased and converted to his purpose the recently closed Nottingham General Lunatic Asylum on Dakeyne Street, Nottingham. The cost of acquiring and converting this substantial building was the first of a long line of expenses he was to bear implementing his plans for a boys’ club. 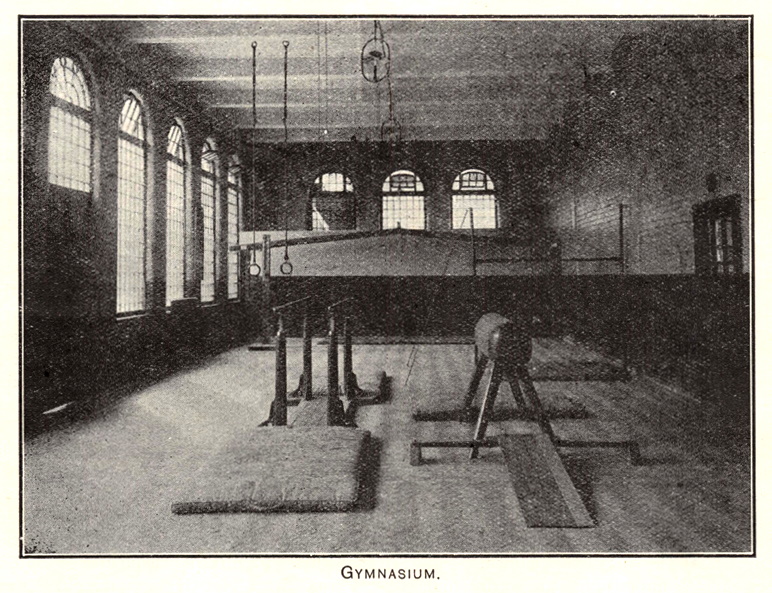 Rooms were furnished for games, gymnastics, drill, workshops, classrooms and a brass band. There was also a library comprising over 350 books, a sweet shop, baths, and separate rooms allocated for junior and old boys. The club was named the Dakeyne Street Lads’ Club, soon popularly shortened to DAKO. With help of a donation from a philanthropist hosier friend, John William Lamb, he purchased athletic grounds on Trent Lane covering seven acres. Here he established football and cricket pitches and a river frontage where boys could bathe, row, and fish.

Determined to provide educational opportunities for club members, he devised a scheme with the local Education Committee to supply specialist instructors to teach academic and craft subjects, such as reading, writing and composition, shorthand, arithmetic, book-keeping, history, geography, crafts, woodwork and shoe repair. The

Dakeyne Street Lads’ Club became an official Evening Continuation School under the control of the Education Committee and under Government inspection. It soon had the highest average attendance of any evening school in Nottingham.

He had established a radically new kind of boys’ club that drew worldwide attention and with membership of three to four hundred boys became the largest Company of the largest youth movement in the world.

Prominent in team sports, fielding three football teams, the 2nd Nottingham Company played a significant part in Battalion inter-Company competitions and at annual demonstrations held at venues such as the Mechanics Hall, the Albert Hall, the Hippodrome, and the Empire Theatre. The annual camp, sometimes shared with other Companies, attracted up to four hundred boys.

With so much going on, boys were disappointed to leave at the age of seventeen and from 1909, a room was set aside to allow them to continue their association with the club. They were provided with games tables and ran sports teams. In return, they were expected to attend the Sunday Bible class and assist at camps. The arrangement was given official status in 1912 with the inauguration of the Dakeyne Street Old Boys’ Association.

During this period, the work of Oliver Hind was prolific. Not only did he dedicate a great deal of time into running and developing his club, but from 1906 he took on the role of Nottingham Battalion President which he performed with vigour and success for seven years before becoming the North Midlands representative on the governing body of The Boys’ Brigade.

In 1908, two boys approached him to discuss their interest in beginning a fresh life in Canada. He encouraged them and assisted in organising their outfitting and voyage and in finding them employment in farming when they arrived. Later he visited and was so impressed with what they had achieved that he purchased a farm of 270 acres, known since as the Dakeyne Farm. An average of 15 boys were sent every year. The cost of emigrating was £15. If it was borne by the club, the boy repaid it within two years of his employment in Canada. All other costs relating to a boy’s accommodation and training were met by the club. After completing a year on the farm, they were found suitable employment in Canada.

Of 450 old boys who served their country in the First World War, 73 paid the ultimate price. Their names were inscribed in a memorial placed in a prominent position in the club. In the deprivation that followed the war, a free Christmas morning breakfast for five to six hundred young children selected from the most desperately poor families in the area was introduced as an annual event.

Towards the close of the 1920’s, the Company received an inheritance from Mr. Naylor, a retired fish and chip shop owner in Sneinton. The legacy was used to acquire a large area of land at Chapel Saint Leonards on the Lincolnshire coast that thereafter provided a permanent site for 2nd Nottingham Company camps which were regularly attended by 300 to 400 boys.

Unfortunately, towards the end of the decade Oliver Hind’s health deteriorated. He died at the age of 58 on 7th of July 1931 leaving a remarkable legacy and a club that survived until the latter part of the 20th century. The tradition continues to this day in the form of the ‘DAKO Flying Angels’ gymnastics team.