For over half a century, the Duke of Edinburgh was at the forefront of youth social action, volunteering, and non-formal education for young people. He held a passion for the lives and opportunities available to young people and worked tirelessly to make a lasting difference. His support – and genuine interest in the stories he heard from young people – won him a place in the hearts of many members of The Boys’ Brigade.

The Duke of Edinburgh’s Award Scheme

The Duke of Edinburgh took an active interest in the stories of those who had completed the Award Scheme and he made an effort to personally present many Boys with their Awards. When presented, these were often given with a large dose of the Prince’s well-known humour. This was no better demonstrated than during a visit in 1959 by Prince Philip to talk to members of The Boys’ Brigade from Lancashire. When observing a group of Boys cooking sausages as part of their demonstration of outdoor pursuits, the Duke was asked if he would like to try some. His response encapsulated his warm and caring nature towards young people:

“No, thanks, I’ve just had lunch with the Lord Mayor at the Town Hall. He might think he didn’t give me enough to eat!”.

Each year more than 1000 young people in The Boys’ Brigade are involved with the Duke of Edinburgh’s Award through their local group in a programme of practical, cultural, and adventurous activities. The programme is designed to support the personal and social development of young people and is a great legacy left by the Duke. 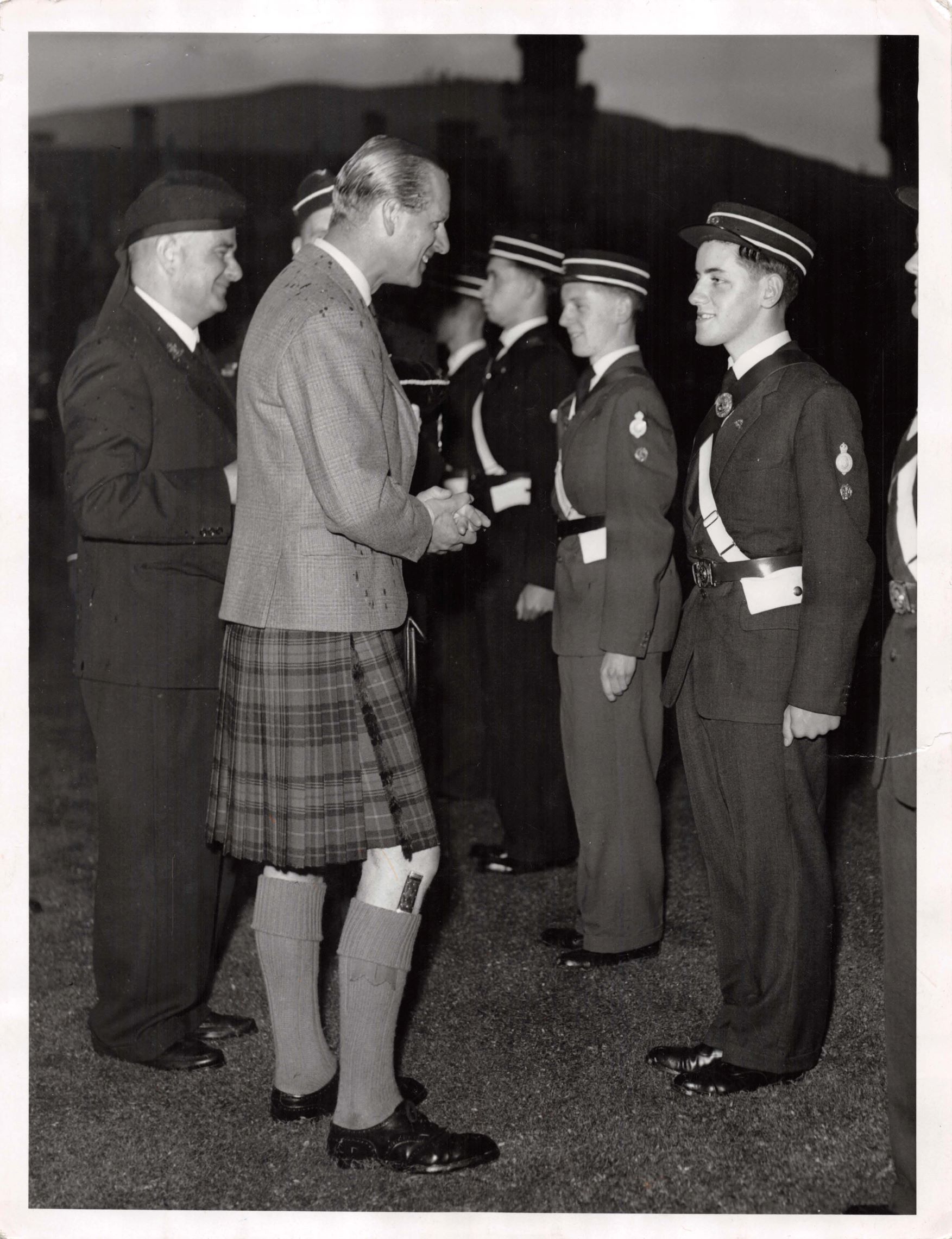 The Duke of Edinburgh Alongside our Patron

At some of the marquee events in the history of The Boys’ Brigade the Duke of Edinburgh was found at the side of Her Majesty the Queen when carrying out duties as the Patron of the organisation.

One of the earliest of these prestigious events was the Reception at Balmoral Castle hosted by the Queen and Prince Philip on 6 September, 1958. At this event, which marked the 75th anniversary of The Boys’ Brigade, the Royal party inspected a parade of 200 Boys and 1200 Officers. The Duke showed an obvious and sincere delight in the proceedings and was able to provide a personal touch of congratulations to 21 Boys who had achieved the Duke of Edinburgh Gold Award. Moreover, such was his enthusiasm to speak at length with each Boy, he took much longer than the Queen (who was presenting Queen’s Badges) and Her Majesty was made to wait for Prince Philip to finish.

During the 90th anniversary celebrations of The Boys’ Brigade on 22 February, 1973 the Queen and Prince Philip visited Brigade House in what was a most memorable occasion for those present. The tour was comprehensive, with the Royal party visiting every office, meeting every secretary, and exploring the training area. During this prestigious event the Duke of Edinburgh displayed his usual enthusiasm, and was said to be “quite at home when talking to Boys” and, much in the same way as at the reception at Balmoral Castle, the Prince got left behind and kept the Queen waiting due to his desire to converse in detail with everyone he met.

Late into his 90s the Duke of Edinburgh continued his active support for the Award scheme bearing his name and it was a proud moment for those Boys who received their certificates in person from the Award’s Patron and Founder at prestigious venues including St. James’s Palace. The Prince continued to demonstrate a keen interest in the work of The Boys’ Brigade and would spend considerable time speaking to Award holders at presentation ceremonies. In 2017 the Prince stepped away from public life as his health deteriorated, with one of his final interactions with members of The Boys’ Brigade taking place on 16 May, 2016 where eight members from the Northern Ireland District were presented with their Duke of Edinburgh Gold Awards at a special presentation at Buckingham Palace.

Legacy of The Duke of Edinburgh

The Duke of Edinburgh will be remembered by The Boys’ Brigade as a pioneer in youth work through the Award which bore his name but also for the personal interest and humour he shared with the Boys he met during special Royal events. He will forever hold an important place in the history of The Boys’ Brigade through the experimental work conducted in the 1950s which changed the character of badgework and Company activities in the decades to follow. Moreover, alongside the Queen, Prince Philip added to the prestige of events marking special occasions in the history of The Boys’ Brigade including the celebrations of the 75th anniversary and the visit to Brigade House in 1973. Whenever the Duke of Edinburgh engaged with members of The Boys’ Brigade it was always on a personal level and it is for this that the Prince will be remembered most warmly.