Tom Curr was born in Edinburgh in 1887 to a Baptist family for whom faith was expressed in action as well as worship. Apprenticed in 1903 to the noted colour lithographic printers McLagan & Cumming, he remained with the firm most of his working life – apart from his military service during The First World War – rising to the position of Managing Director. Although his name is largely unknown to the general public, he was one of Scotland’s most accomplished commercial artists and cartoonists being responsible for the 1940s image of the kilted shot putter that for years adorned every packet of Scott’s Porage Oats, as well as numerous Cunard White Star and Scottish regimental recruiting posters. He was also an accomplished painter exhibiting at the Royal Scottish Academy and his work is included in various Government and other collections. He was active in the public life of his city, including serving as a Town Councillor, (later as a Bailie). He was a Magistrate, a Director of the YMCA, a President of the Edinburgh Rotary Club; an original member of the Scottish Advisory Council of the BBC – as well as a broadcaster for the Corporation on radio and television and President of the Baptist Union of Scotland 1947-48. However, it is his work for the youth of Edinburgh, specifically his leadership of the 46th Edinburgh and the Edinburgh Battalion, that he would have wished to be remembered. This ranged from the everyday activities of meetings to the theatrical spectacles which were performed to audiences of thousands. 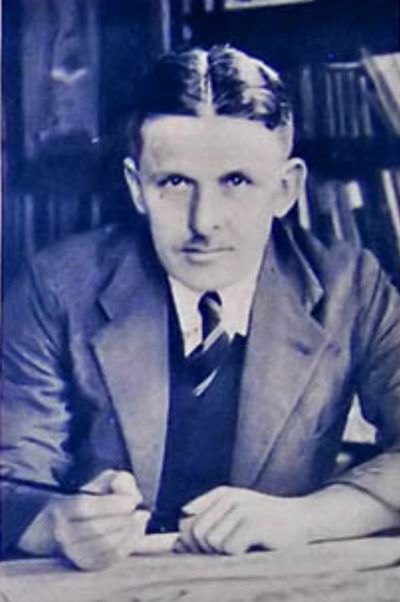 On his return to Edinburgh in 1920 Tom had moved his religious affiliation from Charlotte Chapel to Dublin Street Baptist Church, the latter having an outreach mission in Canonmills and so it was that on 23 October 1923, ten boys gathered at Canonmills Hall, and under the Captaincy of Tom, and his Lieutenant R Brewis Anderson, the 46th Company was reborn.

By the end of the first twelve months of its existence the membership had risen to sixty members, and in the years that followed it regularly exceeded 100 members, making the 46th the largest Company in the Edinburgh Battalion. As Tom would later write the large membership meeting in a small space had  meant that ‘when the whole company fell in, they couldn’t move north, south, east or west’  and that it was no wonder that despite its success in football, bugling, and other competitions the 46th was never much of a drill Company.

Tom’s service to The Boys’ Brigade extended well beyond his own Company. He used his professional skills to illustrate War Memorials, membership cards, recruiting leaflets, posters, birthday and Christmas cards and other printed material for the wider organisation. He also embraced the technology of radio and his first Boys’ Brigade broadcast was from St Martin-in-the-Fields in 1943, part of the of the Brigade’s Diamond Jubilee celebrations. This was followed by the broadcast of the 46th’s Bible Class on 29 September 1946 and in September 1954 another from Thurso, birthplace of the Brigade’s founder, on the occasion of the centenary of his birth. 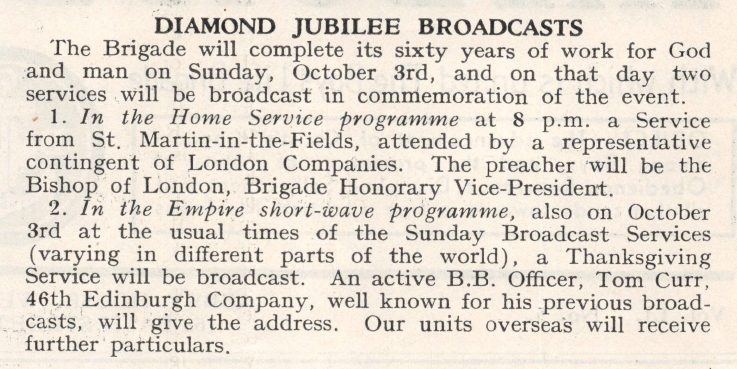 His heavy workload both professional and voluntary eventually took its toll on Tom’s health and in 1955 he was forced to relinquish his Captaincy of what had become known as the ‘Glorious 46th’. After several bouts of serious illness Tom died at home in September 1958. Amid the sadness at their loss of one who had worked so hard for the benefit of the city in general, and for youth in particular, those who had known him raised funds for what they hoped would be a lasting remembrance through the establishment of the Tom Curr Memorial Room in the Edinburgh Battalion’s headquarters on Victoria Terrace, which was officially opened in January 1960 by Lord Home, whose father had been a stalwart supporter of the Brigade. This was also the year that a memorial plaque was first placed on a tree near Lilliesleaf, in the Scottish Borders.

Willie W Johnston took over the Captaincy in 1955 and handed over to George D Hagart in 1974, with the Company finally disbanded in 1988. After each man’s death further plaques remembering each of them were added to the tree at Lilliesleaf with other names joining them in subsequent years.

Tom served with the Argyll and Sutherland Highlanders during The First World War, the regiments’ motto being Ne Obliviscaris – Do Not Forget. Tom never forgot those who didn’t come home from that conflict and those who had been members of the 46th Company Edinburgh never forgot him.