Perhaps the most worthwhile fund-raising project undertaken by the movement in wartime was the provision and maintenance of two large recreation huts, one at Rouen and the other at Edinburgh, for serving soldiers and sailors. An appeal was made in March 1915 for a Rest and Refreshment Hut, at an estimated cost of £450, to be run in cooperation with the Y.M.C.A. for the benefit of the troops generally and for ex-B.B. servicemen in particular.

The response was magnificent. With characteristic enthusiasm, the B.B. had raised £2,820 by November 1916, thus providing for the building of one large double hut at Rouen (costing £1,000) and another in Edinburgh – where so many men passed on their way to and from France. Brigade staff must have felt that the end result was well worth all the bureaucratic headaches over passports and permits for the canteen staff sent out to Rouen.

A surviving leaflet advertising the Rest and Refreshment Hut on the Mound, Princes Street, Edinbugh, to ‘soldiers and sailors passing through’ invites them to take advantage of the Hut, open day and night, and offers breakfast, tea or supper at very reasonable rates, a free wash and brush up, sleeping accommodation or a ‘shake-down’ on the floor, blankets provided for a 1d., hot baths – plunge 3d., spray 2d. – and a free cloakroom for left luggage. In Rouen, The Boys’ Brigade Recreation Hut, close to the front line, was large enough to accommodate a thousand men at a time, and was well provided with games, papers, magazines, a billiard room and a canteen. It was managed and staffed by Boys’ Brigade officers and was intended to be as similar as possible to the club rooms which so many companies ran. There is no question that the value of the Hut to the ex-Boys’ Brigade member was even greater than to the troops in general. ‘At a time when the fierce and cruel temptations of a large camp are making themselves felt, it is no small Service to remind Old Boys of the things that they were once taught in “The Old Company”,’ wrote George Barclay on 5 October 1915 in a report to Peacock:

I cannot refrain from saying that the men as a whole seem amazingly responsive to any religious teaching. I would almost be inclined to say definitely that never in all our nation’s history has there been a large section of the Community as accessible and receptive as the men of the Expeditionary Force seem to be today. 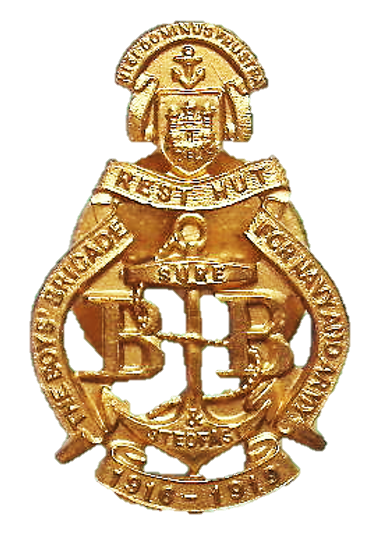 Heroes of the Brigade