The Boys’ Life Brigade was formed in 1899 and was only to continue as a separate movement in its own name for 27 years. However, during these years it grew steadily along similar lines to ‘The Boys’ Brigade’. The Union of the BB and BLB in 1926 created a significant increase in numbers and an amalgamation of ideas and changes which were to have a long-lasting effect.

The union was not a smooth and automatic process and as early as 1913 the idea of a Union was raised and a Conference held in January 1914 when a provisional Scheme of Union was prepared but could not secure approval. The BLB Administrative Council on 14th March passed the following Resolution – ‘That while welcoming all possible co-operation, this Council regrets that it cannot agree to the proposal scheme of Union because it does not provide for the elimination of the model rifle’.

With the death of Sir William Smith in May of that same year, followed closely with the outbreak of the First World War ideas of a Union were put aside until 1920 when further discussions took place.  Most agreed that a joint organisation would be to the benefit of all but once again the BLB Administrative Council rejected proposals. Stating – ‘That this meeting of the Council of The Boys’ Life Brigade, whilst strongly impressed with the advantages of the Union, is unable to approve amalgamation with The Boys’ Brigade whilst the use of the model rifle is continued, and the Cadet Scheme remains under the control of the War Office’.

The problems enabling an amalgamation was clear but in 1924 the BB withdrew from the Cadet Force and with the use of the dummy rifle discontinued the way was open for further discussion between the two movements. However, protracted and often acrimonious negotiations proceeded over the next two years until finally in September 1926 the Council meetings of both the BB and BLB approved the Scheme with large majorities. It was agreed that the change would take place on 1st October 1926. 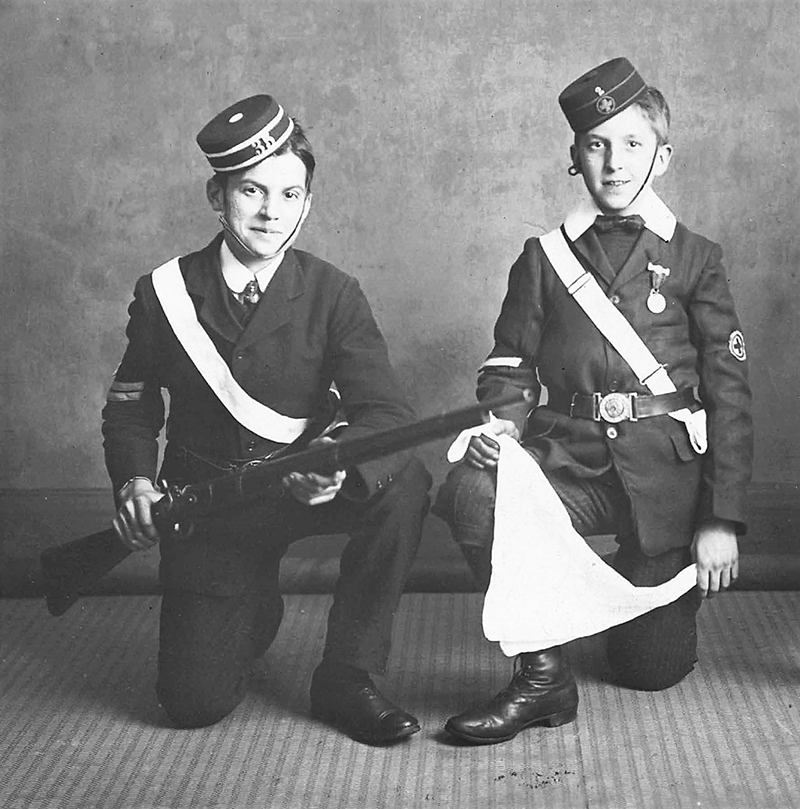 There were many things to agree post-union and much to reconcile with the organisation, badges, object and so on with each movement. Messages were sent to assist with a smooth amalgamation and the BLB publication (The Chronicle) put it clearly ‘We have always based our support of the Union on the definite principle that we were concerned with the welfare of Boys; whether one Brigade or the other obtains advantages through the Union is a purely secondary matter. The object through the Union is to enlarge the usefulness of the Brigade work among Boys of our day and generation and incidentally to relieve the Churches from attempting the invidious task of distinguishing between the merits of two organisations both pledged to the great ideal of leading Boys to the service of Christ’.

One of the most difficult decisions of the Joint Committee set up was to solve the question of titles and badges. Each side, naturally and rightly, valued its name, badge and motto and it would be difficult to ask them to put aside years of history. It was agreed unanimously and approved that ‘The Boys’ Brigade’ would be the title of the organisation and ‘The Life Boys’ that of the junior branch. The badge of The Boys’ Brigade would be the BB Anchor with the addition of the Geneva Cross of The Boys’ Life Brigade and the Life Boys would be the Anchor with the addition of a Lifebuoy.

One of the more significant changes was the amalgamation of the badge structure of the BLB which introduced a much more extensive range of badges. Many of these early designs were to continue within the Brigade structure for years into the future. New offices were to be secured at Abbey House, Westminster in March 1927 to allow for better unification and communication. The Boys’ Brigade Gazette was to continue but amended with the words ‘with which is united The Boys’ Life Brigade’. The Boys’ Life Brigade Chronicle was discontinued. The Life Boys which had had a provisional committee appointed was to be a permanent feature. Other changes included such things as new appointments for example the introduction of the rank of Warrant Officer which did not previously exist with the Boys’ Brigade.