Half an Hour with the Prince

On 10 March, 1921, the young Prince of Wales (later the Duke of Windsor) inspected the Glasgow Battalion at Queen’s Park recreation ground. The Officers who had the honour of conversing with the Prince on this red-letter day were greatly impressed with his genuine interest shown in the work of The Boys’ Brigade, and it was said that the Prince was especially pleased with the smart appearance of the Boys and their steadiness when advancing in Review Order. It would appear that the inspection had a lasting impression on His Royal Highness who, when it came to the Jubilee celebrations of 1933, gave a pleasant surprise to The Boys’ Brigade who learned that the Prince of Wales expressed a wish to pay a tribute to the movement on its 50th anniversary. Thanks to the National Council of Social Service a visit to the 1st Glasgow Company was made possible and on 29 March, 1933, the Boys and Officers got to spend half an hour with the Prince.

It was the desire of His Royal Highness to visit the birthplace of the movement and to see the 1st Glasgow Company “under working conditions” when he paid a visit to the halls in which the movement first began. This meant that every room in the building was utilised to give “as comprehensive an idea of the Company’s many activities as possible”. The variety of interests covered was exhaustive. In all, over 20 activities were on display which included cricket, fret-work, picture-framing, life saving instruction, and music classes, which all led the Prince to remark that he had never seen such a variety of interests covered by a single unit. The attentiveness shown by the Prince was equally thorough as he showed “the liveliest interest in everything” and chatted in a very informal way to the Boys. It was the classes for band learners that captured His Royal Highness in particular as “he inspected, with a drummer’s perception, the big drum, and threw more than an amateur’s look at the cymbals”. It was testament to the Company that they were able to put on such a display and the efforts of all the Boys and Officers were evidently appreciated by the inquisitive Prince. 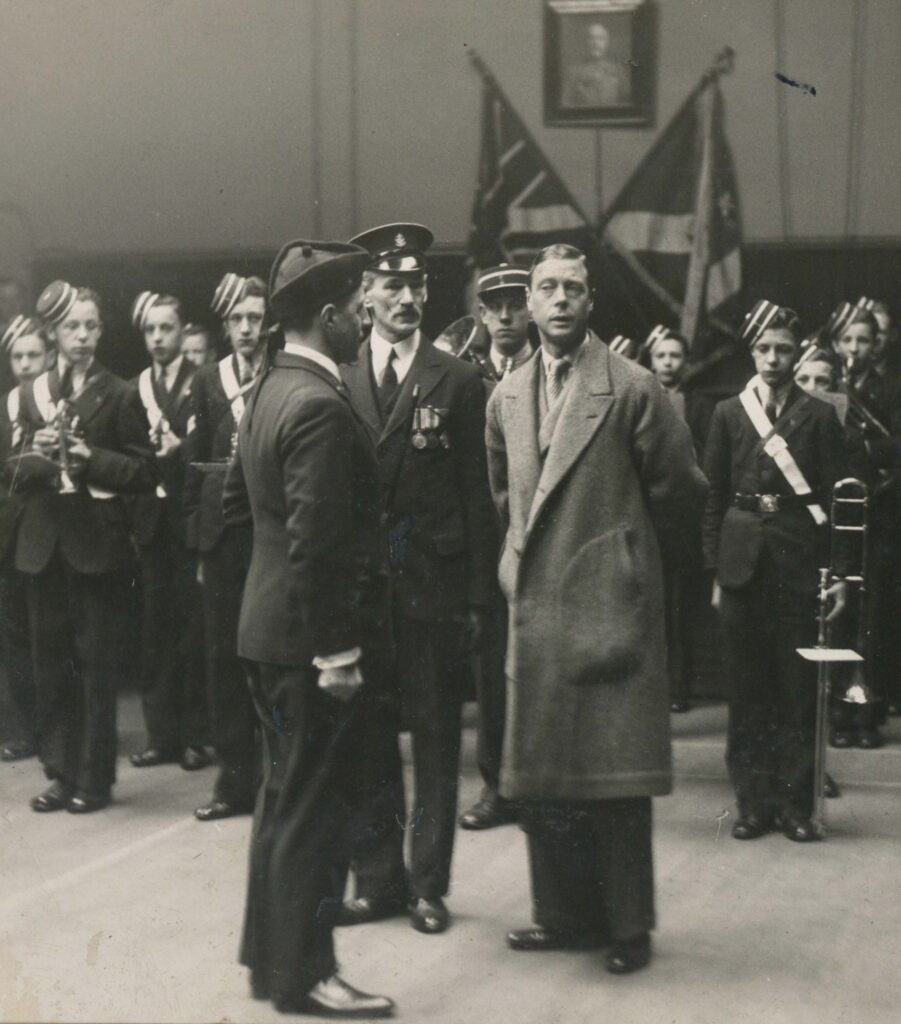 An important part of the visit was a presentation of the surviving members from the original Company and other significant Brigade officials. The only known survivors (10 in total) from the pioneering band of 30 who laid the foundations for the movement were introduced to the Prince. The ‘veterans’ were drawn up in a line alongside the members from 1933 and the Prince shook hands with each of the original recruits apart from one – Mr J. Fulton – who was in Australia at the time. The Prince of Wales was also introduced to Captain Douglas Pearson Smith (younger son of the Founder and Company Captain), G. Stanley Smith (Brigade Secretary), and Colonel Scott to whom the Prince remarked “I was looking for you”, and recalled that Scott had commanded the Battalion when he inspected it in the spring of 1921.  This further demonstrates genuine interest the Prince of Wales took in the work of The Boys’ Brigade and also in those who were active in the continued success of the movement.

The visit to Glasgow was part of a three day tour by the Prince of Wales to witness firsthand the challenging conditions under which the rising generation of the 1930s were growing up and the associated problems of unemployment. The tour ended in Dundee on 31 March where the Prince came into contact with The Boys’ Brigade once more when the Dundee Battalion praraded a Guard of Honour at the quay on his departure. Before leaving, the Prince of Wales delivered a broadcast to the people of Scotland where he paid tribute to Founder and his legacy:

“You all know of The Boys’ Brigade. I was very interested to meet in Glasgow on Wednesday members of the original Company founded 50 years ago by Sir William Smith. When he realised the needs of the Boys around him, he set to and tackled the job himself. He did not wait for a big scheme, nor did he appeal for a lot of money, but, because he had energy and imagination other men and Boys were soon infected by his spirit. 1933 is the Jubilee year of The Boys’ Brigade, and over a million Boys have been enrolled as members since its formation. This is an inspiring illustration of what may grow out of a small individual service, and it should encourage us to make fresh ventures.”

The visit by the Prince of Wales to the home of the 1st Glasgow was a special, personal, and intimate occasion. The half an hour with the Prince added an extra element of prestige to the already impressive Jubilee celebrations which saw Prince Arthur of Connaught (at the Royal Albert Hall demonstration) and the Duke of Gloucester (at the Wembley Jubilee Celebration) pay tribute to fifty years of endeavours by The Boys’ Brigade. The Prince of Wales was an active supporter of the work of The Boys’ Brigade and his determination to pay tribute to the movement as it reached its 50th anniversary is illustrative of the support given by members of the royal family who would continue to support The Boys’ Brigade throughout the Twentieth Century and beyond.