On 30th April 1994 the Brigade paraded in the Castle Quadrangle at Windsor Castle. The last occasion such an event took place at this location was in 1943 during the war when 300 Boys were present all of whom came from the London District. This was of course to celebrate the Brigades Diamond Jubilee in front of King George VI who spoke about the ‘twin pillars of discipline and religion’.

This time members from England, Scotland, Northern Ireland, Wales and the Republic of Ireland were all represented. There were over 1100 Seniors and Officers from 330 different Companies meeting for the first time on that day. From mid morning the participants checked in at a local school where they met their parade officers and were subject to their first inspection. They then moved onto Victoria Barracks which at the time was occupied by 1st Battalion Scots Guards. With only an hour or so rehearsal the Parade was formed up and took the route from Victoria Barracks to Sheer Street, Park Street and then into Windsor Great Park. The Queen had given special permission for the Parade to approach the Castle via the Long Walk from Cambridge Gate. This being a long uphill march into the Quadrangle.

There were 20 Companies of Boys and Officers formed around the Quadrangle. Each Company had a Company Commander and two Supernumerary Officers with Boys from various Companies around the UK and ROI. Music was provided by the London Senior’s Bugle Band, 5th Croydon Pipe Band, Brass Band and 11th Northampton Company Band.

Her Majesty had recently approved a new design for the Queen’s Badge and it therefore was fitting that Her Majesty should personally present the very first of this newly designed award. Each of the 19 Districts nominated one young man to represent these districts and receive the Queen’s Badge.

A number of Special guests were present including a member from the 48th Aberdeen who received the Diploma for Gallant Conduct. A further 17 Boys and young men received President’s Commendations in recognition of particularly noteworthy behaviour either in facing unexpected circumstances or in coping with serious illness.

The occasion also marked The Rt Hon Viscount Thurso of Ulbster retiring from his position of Brigade President and the introduction of The Rt Hon The Earl of Strathmore and Kinghome.

To commemorate the event a special badge, designed by Stephen Lane was produced in two versions silver and gold. The gold version was issued to those who participated in the Royal Review either on the parade or who undertook support duties on the day. Only 1200 gold badges were produced. The silver badge was available for general sale and 2000 of this version were produced. The badge was designed to represent the shape of the Quadrangle with the green background representing the grass. Authority was given for the badge to be worn on uniform or as a buttonhole badge. 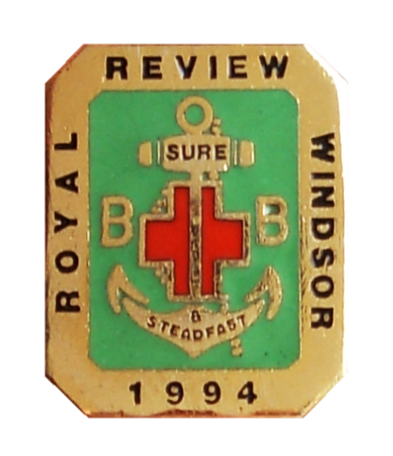