For the duration of her reign, The Boys’ Brigade was proud to have had Queen Elizabeth II as patron. Following in the footsteps of her father (King George VI) and grandfather (King George V), who also bestowed patronage on the organisation, the Queen took a keen interest in the social work and service to the nation undertaken by members and leaders of The Boys’ Brigade.

Princess Elizabeth, her father, and The Boys’ Brigade

During the reign of King George VI, the young Princess Elizabeth accompanied her father at several prestigious events which demonstrated his genuine interest in the youth of the nation. In 1937, Princess Elizabeth had one of her earliest interactions with members of The Boys’ Brigade when she joined the King for the Festival of Youth at Wembley Stadium, London. The Boys’ Brigade was in attendance alongside over 40 societies who paraded the stadium under blue skies and brilliant sunshine. During this engagement the King was presented with a silver statuette by Private Simmonds of the 62nd London Company, with the youthful Princess pictured close-by during the presentation.

The future Queen took a more active role when she met members of The Boys’ Brigade in large numbers at a special event at Windsor Castle arranged to mark the Diamond jubilee of the movement in October 1943. During the height of the Second World War, Princess Elizabeth accompanied the reigning monarch in a demonstration of support for the work carried out by The Boys’ Brigade. It was said that the Princess, accompanied by her mother, “played so gracious a role” and was “an additional source of pride and pleasure”. Princess Elizabeth joined her mother in passing down the ranks during the inspection of the Boys, and was said to be particularly interested in “the more monstrous of the burnished instruments” carried by members of the band.

During his speech at Windsor Castle, the King made his now famous statement on the foundations of The Boys’ Brigade:

“I feel sure that the B.B. will go from strength to strength because it is built upon the twin pillars of religion and discipline, and so is meeting two of the greatest needs of the present time”.

This proclamation seemingly made a lasting impression on Princess Elizabeth, as the same sentiments and support expressed by her father were repeated in words of encouragement when the Queen – herself as patron – has spoken at events during her own reign. 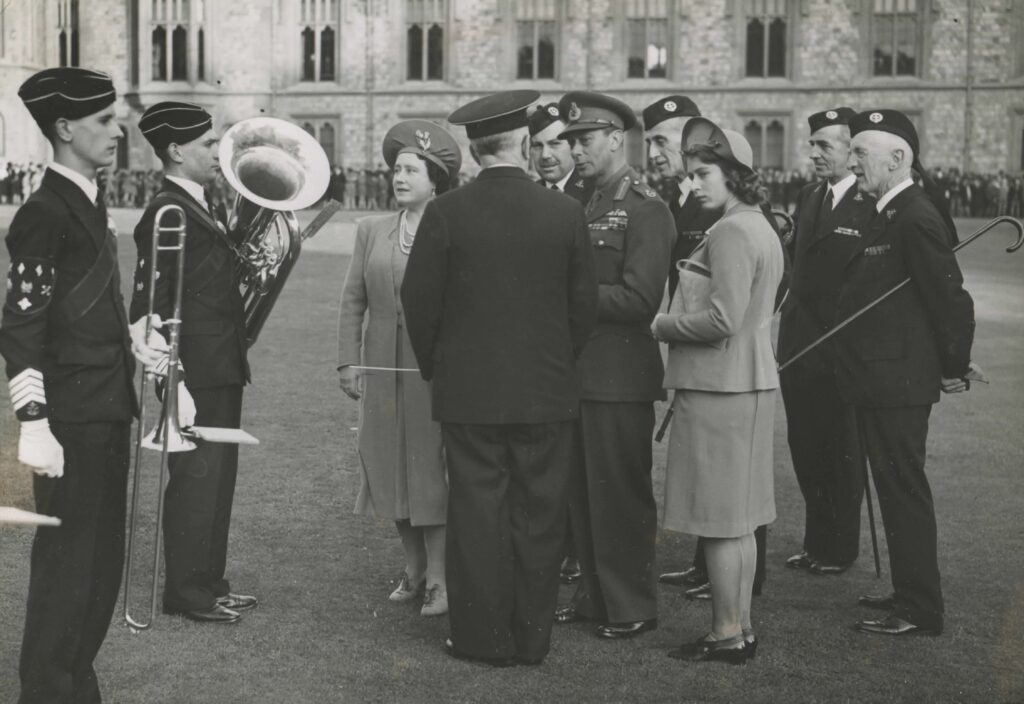 The Queen, our Patron

In 1952 The Boys’ Brigade had the honour to announce that the new Queen had “graciously consented to become patron of The Boys’ Brigade”.  In doing so, Queen Elizabeth II became the fourth reigning monarch to become Patron, following in the stead of King George VI, King Edward VIII, and her grandfather – King George V – who first became the Patron of the Boys’ Brigade as the Duke of York. In becoming the Patron, Her Majesty also consented to the renaming of the premier award in The Boys’ Brigade from ‘The King’s Badge’ to ‘The Queen’s Badge’.  Throughout her reign, thousands of young people have worked hard to earn the badge named after the Patron, with a small handful having the privilege of being presented these by the monarch in person.

During the early decades of her reign, The Boys’ Brigade was fortunate to be in the presence of the Queen at many large-scale engagements. The earliest of these events came during the Royal tour of New Zealand in 1953 – 54 where the Queen, accompanied by her husband, Prince Philip, was present at several functions attended by members of The Boys’ Brigade. Perhaps the most prestigious of these was the youth gathering in Auckland, where the new Queen received one of the biggest welcomes of the tour from 16,000 children from New Zealand’s youth organisations. The Boys’ Brigade was present throughout the Queen’s tour of New Zealand, with a parade in Nelson headed by 5 Queen’s Men, 16 Senior Boys forming a guard of honour at an event in Christchurch, and a parade of 270 Officers and Boys taking place in Palmerston North some of the more notable occasions.

There have been countless remarkable moments in the history of The Boys’ Brigade but few were more impressive than when the Queen hosted visitors to the Brigade Council meeting in Aberdeen to a reception at Balmoral Castle in 1958. The Queen received a contingent of 200 Boys and 1,200 Officers as part of the celebrations for the 75th anniversary of The Boys’ Brigade, with the event a real thrill for those in attendance. During the inspection of the parade, the Queen “showed obvious interest and sincere delight in the whole affair”, took the time to speak to Boys, and presented the coveted Queen’s Badges to a handful of lucky members who were the first to receive this updated award from the hand of the new monarch. The events at Balmoral gave a sense of inspiration and drive for the years to follow, and illustrated the degree to which the Queen was actively engaged in her role as patron of The Boys’ Brigade.

As The Boys’ Brigade marked important milestones during the 1960s and 1970s messages and support from Her Majesty continued to come in. The Queen consented to open Brigade House in Parsons Green in December 1966 but was, unfortunately, taken ill the night before the opening was due to take place. However, Her Royal Highness, The Princess Alexandra, performed the opening ceremony on behalf of the Queen who, despite being unwell, took a great deal of interest in the success of proceedings. In a letter from Her Majesty read by Princess Alexandra, the Queen wrote of her hearty commendation of the work of The Boys’ Brigade at home and overseas. Moreover, the Queen reflected on the words of her father from the 1943 Royal Review, noting that “in a swinging age it is still important to have a basis of faith and discipline in order to keep one’s feet on the ground”. 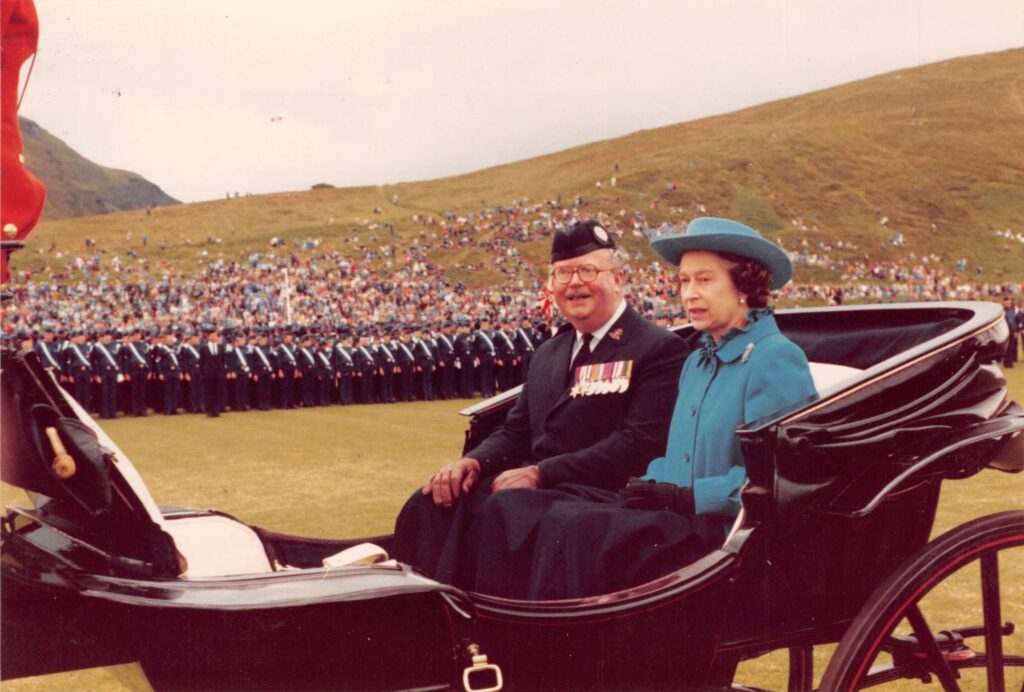 The Centenary of The Boys’ Brigade and Beyond

1983 was a year of reflection on 100 years of service to young people and a moment to look forward to the times to come. In a year of centenary celebrations, no more significant or proud moment came than when the Queen undertook a Royal Review at Holyrood Park on 2nd July. With 3,044 Boys and Officers on parade from all over the United Kingdom and Ireland, this was a truly monumental event, requiring weeks of planning and fleets of coaches to bring the review together on the rich greens of Holyrood Park. This was an historic occasion, long to be remembered by those privileged to be on parade. The Queen arrived in a horse-drawn carriage and inspected the parade along a route some three quarters of a mile long. In her address to the assembled audience, the Queen spoke of being delighted to review The Boys’ Brigade in their centenary year and gave words of congratulations for the achievements of generations of men and women. Moreover, the Queen referred once more to words from her father’s often quoted 1943 speech delivered at Windsor Castle, stating:

“your Founder builded better than he knew, for he started not only a great movement, but one from which our present wide-spread youth training was destined to spring”.

The Queen went on to thank The Boys’ Brigade for its contribution to national life and the church, and congratulated those on parade for their “smartness and good bearing”. The parade – which took place on a bright and sunny day with a fresh cooling breeze –  will be a never forgotten experience for those in attendance. This was an event where the Queen and The Boys’ Brigade came together in celebration and the Brigade Secretary was thankful to our “gracious patron” who “made it a great day for all of us”.

The Boys’ Brigade was privileged to parade in front of the Queen once more in the spring of 1994 when the planned farewell display for the outgoing President became a Royal Review. Under gloriously warm sunshine, and in the special setting of Windsor Castle, over 1,000 Boys and Officers combined to create another significant event in the history of The Boys’ Brigade made possible thanks to the dedication of our patron. In her address to the parade the Queen referred to rapid social change, and how The Boys’ Brigade had responded to this by embracing the ‘twin pillars’ of discipline and religion.

The Boys’ Brigade continued to share a special relationship with the Queen into the new millennium and there were several moments when the organisation was able to publicly thank the Queen for her patronage. In 2002, when Her Majesty celebrated her Golden Jubilee, the Queen met members of The Boys’ Brigade on several occasions, and in 2006 the Queen received a card from members of The Boys’ Brigade at a meeting of youth organisations at Windsor Castle on 21st April during the celebrations for her 80th birthday. Although smaller in scale than the earlier Royal Reviews, these meetings with the Queen were just as special and, for those involved, will have provided lasting memories.

The Legacy of the Queen

The Queen will best be remembered by members of The Boys’ Brigade for her high-profile engagements; for the Royal Reviews of 1983 and 1994, the special reception at Balmoral in the early years of her reign, and for her visit to Brigade Headquarters in 1973. However, the relationship the Queen had with The Boys’ Brigade did not stop there. She was not just a name to be found at the top of headed paper. Queen Elizabeth II will be remembered as a patron who cared about the work of The Boys’ Brigade and the stories told to her by its members, as a support of its Object and values and, above all, as a passionate advocate of The Boys’ Brigade’s mission.