Since 1927, The Boys’ Brigade had been renting accommodation in Abbey House London for use as a Headquarters and Supplies Depot, however in 1961 the building was sold for redevelopment, and the Brigade would have to move by 1966. A decision was made at Brigade Council in 1959 to raise the necessary funds to build a purpose built Boys’ Brigade Headquarters  building in London. The first meeting of the Appeal Committee, chaired by Lord Luke of Pavenham, was  held  in  December 1959, and it was decided to launch an appeal to raise £100,000 from 1 March to 4 October 1961. Since the proposal for a permanent Headquarters had come from the body of the 1959 Council, the actual responsibility for the success of the appeal rested with Council members. A company target was set ranging from 2/6d. (25p) per head for twelve-year-old boys to £1 for officers. The Boys’ Brigade hoped to raise contributions of at least £10 per company for the Appeal Fund, and by March 1961 over £14,000 had been received towards the target.

To boost the Appeal Fund, it was decided to hold a Run across the country in 1961, where baton carrying teams would run a relay, carrying a message of greeting, culminating in a ceremony at Mansion House on 11 May 1961 where the Lord Mayor of London received the runners. Fifteen final runners, covering the last stages of the five routes, were to represent over 2,500 of their comrades running a total of over 3,000 miles from John O’Groats, Northern Ireland, Fishguard, Land’s End, and Cromer in Norfolk.

The achievements of the various runners along the five routes was summarised by the Gazette:

Boys who have traversed their Ulster countryside through day and night, converging on Belfast, and then the sea miles to Glasgow; Boys who have trotted across the Scottish Highlands in torrential rain, day and night; Runners who have slogged across the Yorkshire Moors in a howling gale; Teams in the South who have sweated it out along dusty roads and the fume laden atmosphere of towns, in summer heat-all converging upon the heart of the Commonwealth, laden with Civic Greetings and generous gifts from B.B. well wishers. All these combine to make the Run an outstanding success.

After several years of long and diligent search all over London for suitable accommodation, a site was found at Parson ‘s Green, Fulham. The new Headquarters was meant for the joint use of The Boys’ Brigade, its London District , and the newly formed sister organization of the Girls ‘ Brigade. The Appeal Fund had raised most of the money needed for Brigade House, with some contributions from private industry, and on 9 December 1966 the new offices were officially opened by Princess Alexandra, deputising for the Queen. ‘It is with real regret that I am unable to come to Brigade House to see this new Headquarters of The Boys’ Brigade and the Girls’ Brigade,’ ran the Queen’s letter from Buckingham Palace:

On the occasion of the Diamond Jubilee of The Boys’ Brigade in 1943 my father forecast that it would go from strength to  strength,  because  it  was  built  upon  the twin pillars of  discipline  and religion and so was meeting one of the greatest needs of the present time…..The establishment of positive standards of value is becoming  increasingly  difficult  for  young  people,  who  find  it  hard  to  know  what  or  whom  to respect.

A few years after the two Brigades had moved to Fulham, in 1971, a hostel was built on the site to accommodate visiting Brigade members. By 1986 the Brigade was finding it difficult to finance the running and maintenance costs of the building, and it was sold in 1988, with the Girls Brigade moving to headquarters in Oxfordshire, whilst The Boys’ Brigade moved to nearby Kings House, Galina Road in Hammersmith. 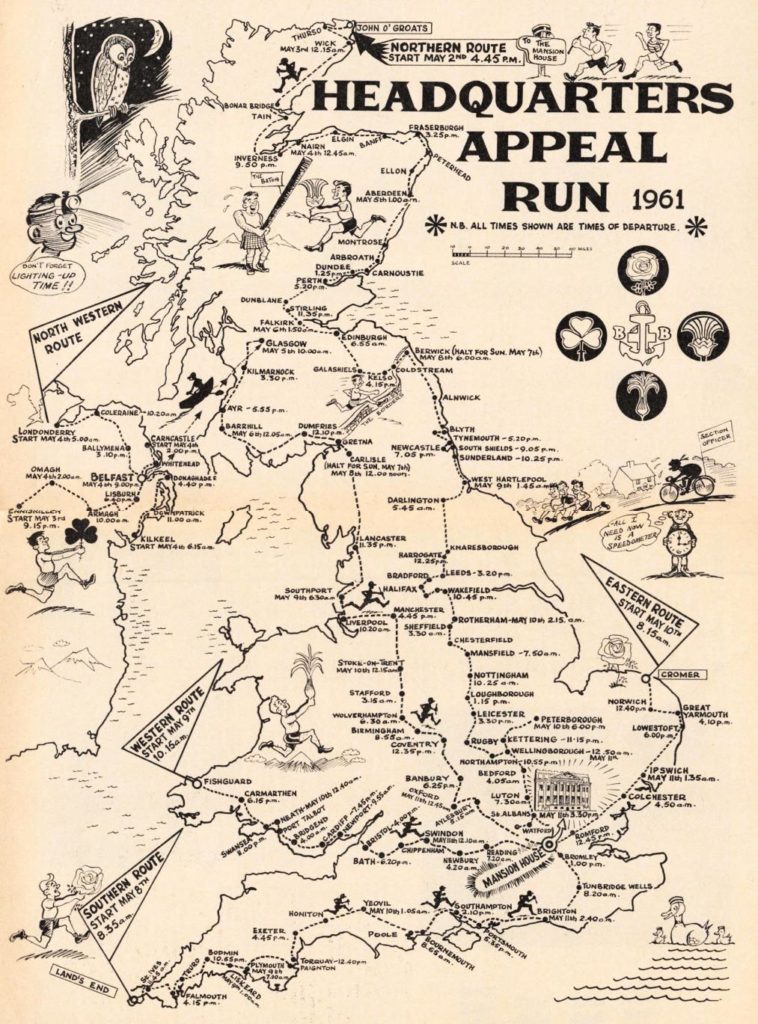 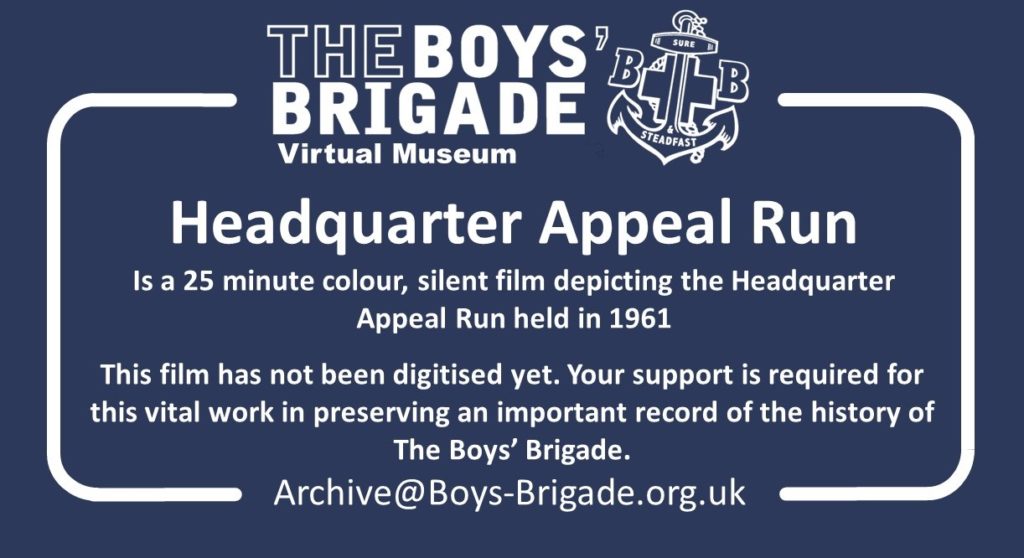 Along each route the runners carried a Roll of Bearers book in a haversack with a woven BB crest badge. These books were signed by all the runners at the end of each stage of the route.