From the early 1890’s Companies, and in some instances Battalions, had started to customise the membership cards issued to the members. Early examples from the 1890s show the Glasgow Battalion overprinting details of access to the city swimming baths on the back cover, and as the BB Gazette of November 1889 records: Since the formation of the Glasgow Battalion, Swimming has always been recognised as part of the work to be engaged in and encouraged in the Companies. The Executive Committee made arrangements with the Corporation to grant to the Boys of the Battalion the use of the Baths at half the ordinary charge, which is Two pence. On showing their Membership Cards they are admitted for One penny. 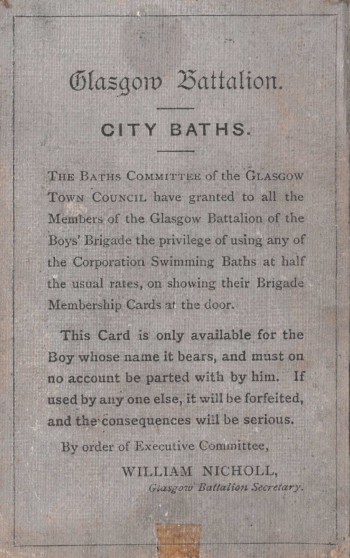 Similarly Companies used this space to over print Company diaries and events. Some of the larger Companies started to add booklets into the cards, some as many as 10 pages, including details such as Squad members, Company rules, and competition winners. (Example below: 40th Edinburgh 1924-25) Some Companies continued to include these booklets in the membership cards until the late 1970’s, and these are a valuable record of the activities of individual Companies.

Whilst the importance of a membership card is less in the 21st century as it was in the 19th century, a number of Companies continue to create custom membership cards, and issue these to their members. (Example below: 1st Rosehearty 2021-22)

The BB archive collection contains many examples of Company cards and the inserts contained within them. We are keen to continue to add to this, as it is a valuable resource to be preserved for future generations. If you have membership cards please contact us, as we would be interested in obtaining digital copies.