The Life Brigade Chronicle Vol.22 No.9 – The Executive Committee has awarded the Diploma and Medal for Courage to Private John Wilding, of the 1st Dukinfield Company.

The Life Brigade Chronicle for July 1923 recorded:  The Executive Committee has awarded the Diploma and Medal for Courage to Private John Wilding, of the 1st Dukinfield Company, for an act of bravery and self-sacrifice which may unfortunately cost him his life. This brave lad, aged 12, was going to school with some other boys in Dukinfield, Cheshire, when he saw a motor wheel which had become detached coming down the hill at great speed. The wheel was from a heavy lorry and weighed 5cwt and was making straight for a little boy and his sister.

Private Wilding rushed to their rescue and managed to push them out of the way, but could not escape himself. The wheel knocked him down and passed over his head with the result that he is lying in hospital in a very critical condition.  The last letter received from Captain Deston states that the lad has regained consciousness but there is some doubt whether he will recover.

A later issue of the Life Brigade Chronical recorded that John Wilding had succumbed to the injuries sustained during the rescue, and the medal was presented postumously. 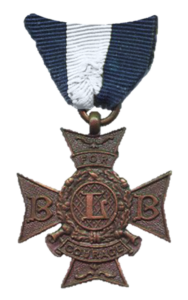