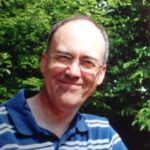 John has been a member of The Boys’ Brigade since joining The Life Boys in October 1964. He is still a member of the same Company with unbroken service and recently became the Company Captain of 2nd Sutton Coldfield Company in 2020. Having experienced the change from Life Boys to Junior Section he achieved the new ‘Gold Badge’ in its first available year then progressed to be awarded the President’s and Queen’s Badges in the Company Section.

John has been particularly involved in sporting and other competitions within the Company and the Birmingham Battalion where he is now a Vice President. John has travelled to many Companies and Battalions through his support of BB National Competitions and Inter Battalion sporting events.

He is also the current editor of the Boys’ Brigade Archive Members Association Newsletter which is produced four times a year to its members. John has said that this opportunity to write and research about the The Boys’ Brigade has shown what a rich heritage exists and how proud we should all be about what has been achieved in the past and how that should encourage us to create our own heritage into the future.