1983 was the Centenary of The Boys’ Brigade and the hundreds of events were held, nationally, and by districts, battalions and companies. Some of which were recorded in the BB Gazette:

Centenary Day; 4th October 1983 – Our Founding Day, 4th October 1983 was marked by Companies throughout the British Isles and in many places abroad by special services, the reading of HM The Queen’s Centenary message and the issuing of the special New Testaments to the boys, followed by a social evening including the cutting of birthday cakes.

The intention was that the actual time and date of the first meeting of the original Company, the 1st Glasgow Company would be commemorated in this way thereby linking Companies everywhere in this recollection of our founding. It has been estimated that three-quarters of a million members and friends attended these events in the United Kingdom.

National Thanksgiving Service: St Paul’s Cathedral – A National Service of Thanksgiving was held in St Paul’s Cathedral on Thursday 27th October 1983, the Founder’s Birthday, in the gracious presence of Her Majesty Queen Elizabeth The Queen Mother. We were also honoured to have with us the Archbishop of Canterbury (who preached the sermon), the Bishop of London and the Lord Mayor of London, together with many other distinguished guests. The congregation of 2,300 included District and Battalion representatives from all parts of the British Isles and more than 700 boys and young men of all ages. They were very much in evidence and made a major contribution to the occasion. In the congregation were Queen’s Men, NCOs, and Seniors from all 180 Battalions, and representative groups of Juniors and Anchor Boys. Outside a bugle band positioned near Queen Anne’s statue played during the arrival of the congregation, and a guard of honour of 100 Queen’s Men lined the steps leading to the great west door. Inside the Cathedral a brass band provided music before the service and the choir stalls were occupied by a choir of 100 Brigade boys, specially formed and trained for this service. Members of the Brigade took part in leading the prayers including Simon Mooney (aged 7) of the 17th Kingston & Merton Company who is the youngest person ever to have taken part in a service in St Paul’s and his name has been duly recorded in the Cathedral’s archives.

In Scotland a National Service of Thanksgiving was held at St Giles’ Cathedral, Edinburgh on 9th October, at which the Moderator of the General Assembly of the Church of Scotland, the Rt Revd J. Eraser McLuskey, MC, MA, BD, DD, addressed a capacity congregation consisting of officers and boys and friends of the Brigade from all parts of Scotland.

The Service for the Brigade in Wales was held In Llandaff Cathedral, where the preacher was the Revd Dr Donald English.

In Northern Ireland a special service was held at St Anne’s Cathedral, Belfast; and St Patrick’s Cathedral, Dublin, was filled to capacity for a similar service at which the President of the Republic of Ireland (Dr D. J. Hillery) was present.

Centenary Car Run – On 8th October 1984 teams in five cars left Land’s End to drive the 1,000 miles to Thurso, Caithness to be joined by other cars from the Glasgow area, collecting en-route Centenary messages for The Queen. Some 700 messages were collected representing 35,000 members of the Brigade including officers, boys and old boys and incorporating 10,000 signatures. A selection of these were shown to Her Majesty who expressed her great pleasure and appreciation and commended the boys on the originality and ingenuity displayed in their messages.

Remembrance Sunday – The Boys’ Brigade was on duty In Whitehall on Remembrance Sunday. Ten young men from the 2nd West Kent and 29th West Kent Companies under the direction of Mr Gerald Walker, carried out special duties In the Quadrangle of the Foreign Office on the occasion of the Cenotaph ceremony. The party performed their duties smartly and efficiently and were a credit to The Boys’ Brigade.

Songs of Praise: Romsey Abbey – Towards the end of the year the Brigade was featured in the BBC TV Songs of Praise series when a programme previously recorded in Romsey Abbey was broadcast on 17th December 1984. In it some 600 boys and officers of Southern District gave an excellent rendition of hymns and songs which was much enjoyed by the viewing audience.

Songs of Praise: Greenock – A BB service was televised from St Andrew’s Church, Greenock, on 2nd October 1983. The congregation comprised boys and officers of the Greenock and West Renfrewshire Battalions and their parents and friends. The service was conducted by the Rev. John Banks, assisted by the Rev. Ian W. Black and the singing was led by the Glasgow Battalion Central Band under the direction of Mr John Cooper.

Edinburgh international Festival Cavalcade – In recognition of its Centenary The Boys’ Brigade was given pride of place in the 1983 Cavalcade, its massed pipes and drums, bugle and marching bands consisting of 300 bandsmen leading the column down Princes Street.

Ventilator Project – The BB in Scotland raised the sum of £24,963 to provide ventilators for children’s hospitals in Scotland. The splendid efforts of all who took part in this project raised an amount which surpassed all expectations and enabled five ventilator units to be presented.

Stormont Reception – Representatives of the 13 Battalions in Northern Ireland attended a Reception given by The Speaker of the Northern Ireland Assembly (The Rt Hon. James Kllfedder, MP) on 7th October 1983 to mark the Centenary of The Boys’ Brigade. The Speaker spoke in praise of the work of the Brigade to which the District President, Dr G. Humphreys, CBE, MSc,F Inst.P replied. 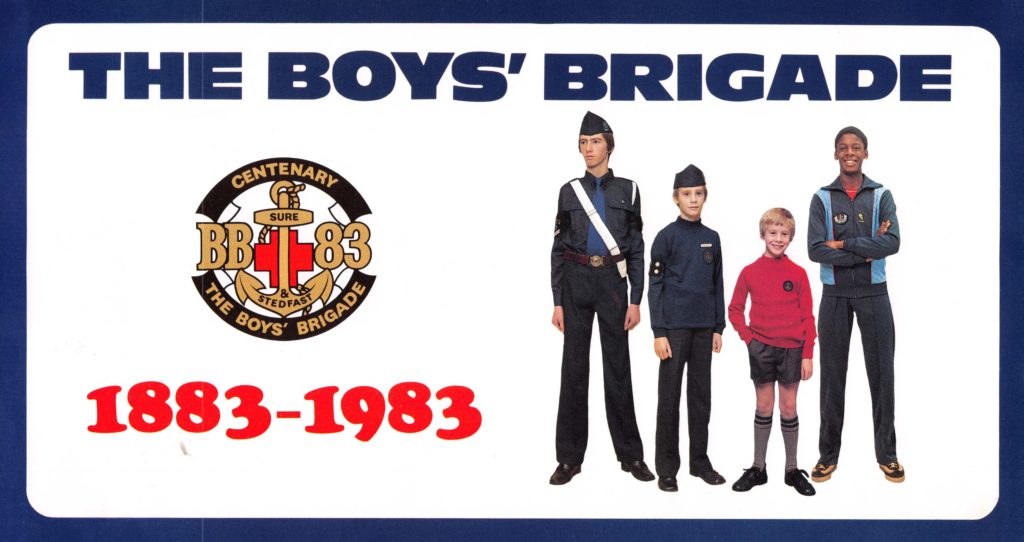 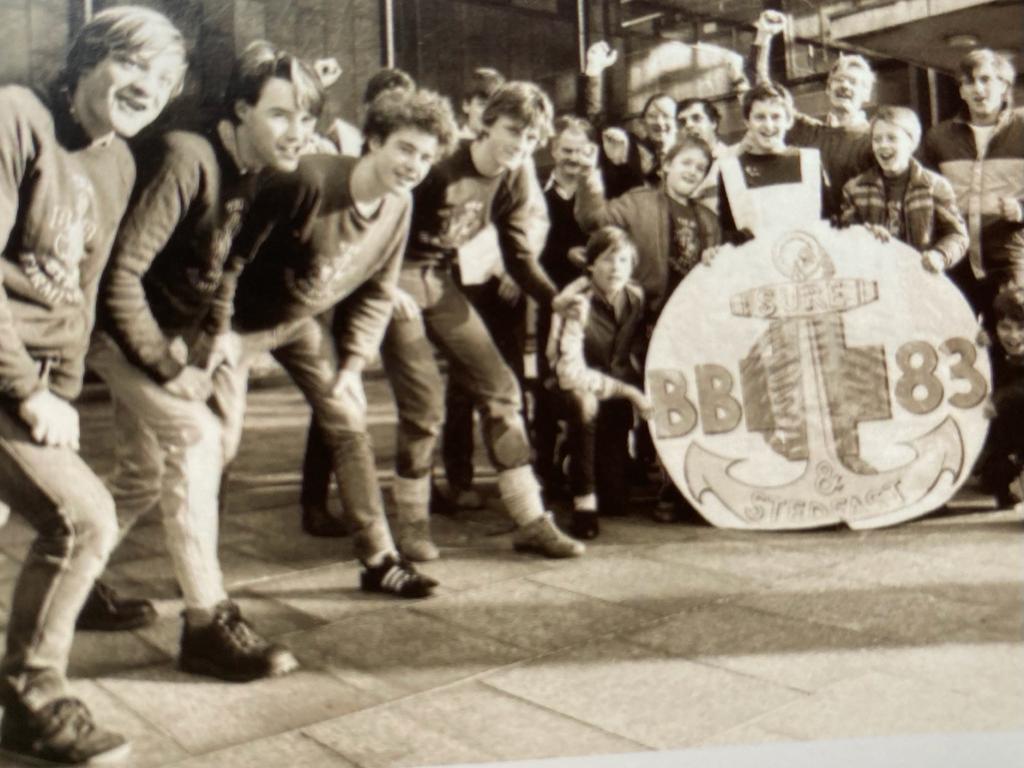 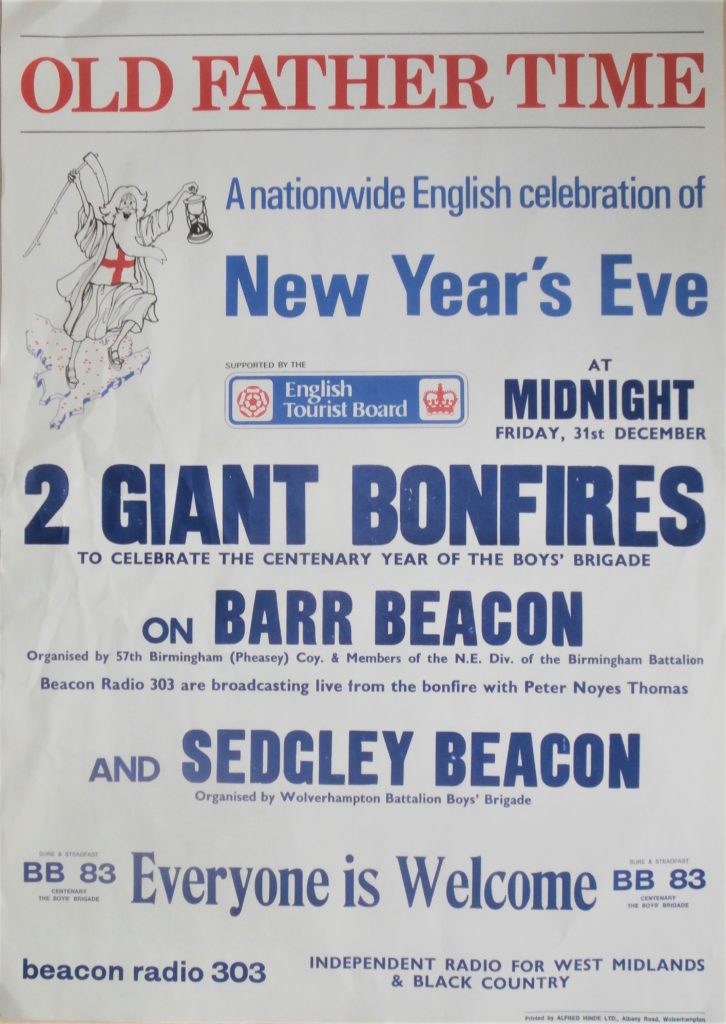