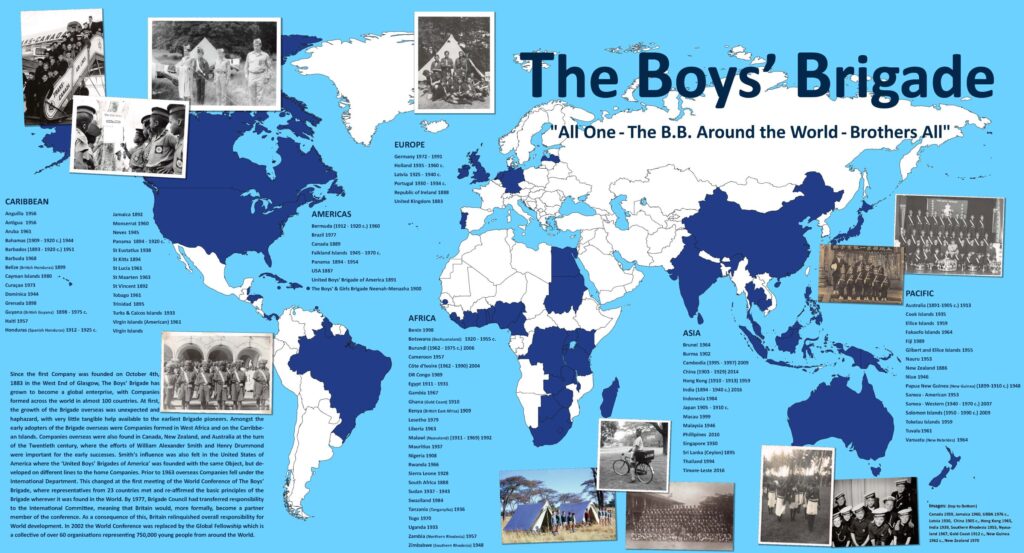 Since the first Company was founded on October 4th, 1883 in the West End of Glasgow, The Boys’ Brigade has grown to become a global enterprise, with Companies formed across the world in almost 100 countries. At first, the growth of the Brigade overseas was unexpected and haphazard, with very little tangible help available to the earliest Brigade pioneers. Amongst the early adopters of the Brigade overseas were Companies formed in West Africa and on the Caribbean Islands. Companies overseas were also found in Canada, New Zealand, and Australia at the turn of the Twentieth century, where the efforts of William Alexander Smith and Henry Drummond were important for the early successes. Smith’s influence was also felt in the United States of America where the ‘United Boys’ Brigades of America’ was founded with the same Object but developed on different lines to the home Companies. Prior to 1963 overseas Companies fell under the International Department. This changed at the first meeting of the World Conference of The Boys’ Brigade, where representatives from 23 countries met and re-affirmed the basic principles of the Brigade wherever it was found in the World. By 1977, Brigade Council had transferred responsibility to the International Committee, meaning that Britain would, more formally, become a partner member of the conference. As a consequence of this, Britain relinquished overall responsibility for World development. In 2002 the World Conference was replaced by the Global Fellowship which is a collective of over 60 organisations representing 750,000 young people from around the World.